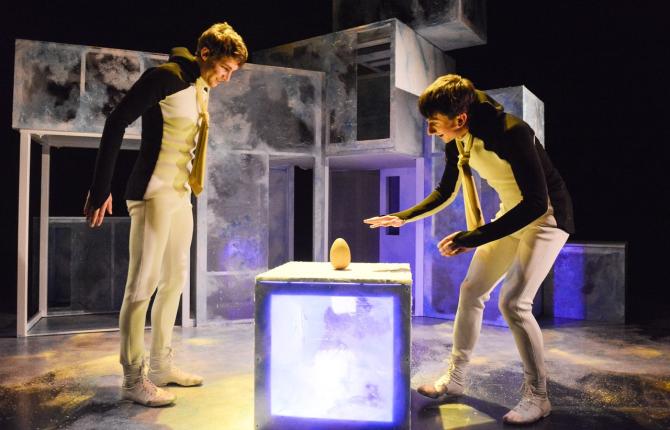 Penguins, the story of Roy and Silo and their chick, Tango, will be staged at the Market Place. this Sunday (March 18). Image by Robert Day.

THE  renowned true story of two male penguins - who came together to care for a chick they hatched from an abandoned egg - is being brought to life on stage by an award-winning Armagh theatre director.

Penguins will be staged at the Market Place this Sunday (March 18) and Paul Bosco McEneaney of children’s theatre company, Cahoots NI, says the show, which is a “non-verbal performance”, is a “family friendly fusion of ballet and contemporary dance” based on a “beautiful story”.

The story is that of Roy and Silo, two male chinstrap penguins living in Central Park Zoo who came to worldwide attention in 1999 after they were observed trying to care for a rock as if it were an egg. They were later given an abandoned egg to care for, which produced Tango – a female penguin which they raised together.

Their tale is the central theme of Penguins, explained Paul. “It’s about what is family and what that means these days. It’s a beautiful story and it’s one that is layered. On one simple level it’s a very visual piece of theatre, but theatre’s also there to spark debate. Roy and Silo were two male penguins who were discovered trying to hatch a rock it as if it were an egg. A zookeeper noticed this and they were given an egg to care for – and the rest they say is history – the three of them became a
family.”

The 45-minute production had its debut in Birmingham and Paul revealed that the response from theatre-goers and critics has been overwhelmingly positive. “It’s been extremely well received and it’s really captured the imagination. Children can enjoy this as well as adults,” he said.

Having left Armagh to pursue his theatre directing career elsewhere, Paul moved back to the area just two or three years ago and is looking forward for local audiences to experience Cahoots NI’s latest production. “I love the Market Place. I just really have a connection there. Penguins is a highly visual, non-verbal performance with beautiful music, wonderful magic and a message of love and family that we hope will leave a lasting impression for our early years audience,” he said.

Penguins will be staged at the Market Place on March 18. For further information please contact the box office on 37 521821.