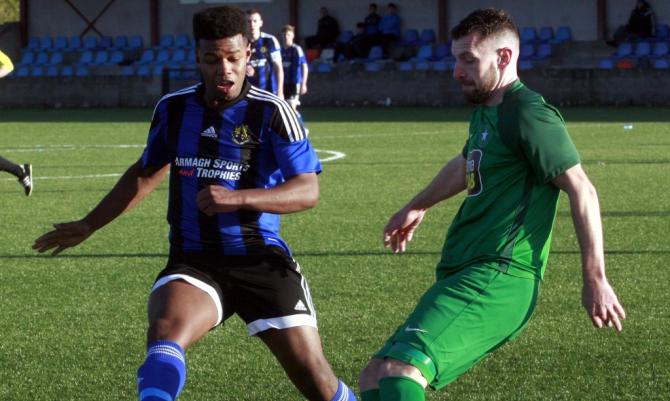 CITY welcomed Crumlin Star, currently regarded as the top side in the Amateur League, to Holm Park for an Irish Cup tie last Saturday and, given the positions of the sides in their respective leagues, Star were odds on favourites to progress to the next round.
Manager Joe Kerr as usual in cup matches  started with Conor Larkin in goal and also back in the starting line up after injury was Stefan McKenna while Ultan Lennon was in the team after missing all but one game due to GAA commitments.
Play commenced in cold and overcast conditions with both sides attempting to gain a foothold on the game but the more experienced Star side looked dangerous down the left wing with the attack including Miguel Chines, former Premier League player with Linfield,b Dungannon Swifts and recently Carrick Rangers.
City forced the play during the opening period with Paudie Judge and Clarke linking up well in several attacks and Luke Grimley with Lennon were alert to any danger posed by Star who were physically stronger than the younger and less battle hardened majority of the City side.
Leo Montiero playing in front of the back four was prominent in breaking up the visitors’ attacks while up front Nedos Maculaitis, McKenna and Michael O Hehir showed promise in their efforts to break down the visitors’ defence.
Halfway through the opening period City came close with a Lennon header from a corner and nearly opened the scoring when an almighty scramble in the Star six year area resulted in the ball being cleared off the line three times before eventually being cleared.
The visitors then made several sorties into the City half and in one break a dangerous cross went across Larkin’s goal area but no one was on hand to apply the finishing touch much to Armagh’s relief. Crumlin Star made the breakthrough in the 43rd minjute when Conor Kerr cleared upfield straight to a Star player who immediately sent the ball back up the left wing where a cross was played into the City penalty area and, as Larkin came out to try and claim the ball, McNeill got there first to lob his shot over the keeper into the empty net.
But in the last kick of the half the home side levelled matters when Maculaitis received the ball and although surrounded by three defenders managed to get a touch on the ball which deflected off the heel of a defender and ended in the bottom left corner with the Star keeper wrong-footed.
The second half began with City looking more positive despite playing into low sunshine and after a run towards goal Maculaitis was brought down and a penalty awarded, but McKenna, who is usually pretty accurate, sent the spot kick wide to the dismay of the home support.
Just after this when City were awarded a free kick outside the box Maculaitis came close, hitting the ball just over the crossbar with the keeper beaten all ends up.
O Hehir then made way for Jake Keegan and after the relief of not conceding the spot kick Star came more into the game posing a few problems but the home defence dealt well with the danger and on 70 minutes Matthew Hynds replaced Montiero in the middle of the park, however after a foul by Judge outside the box Star were awarded a free kick. With City keeper Larkin shielding his eyes from the strong sun McKervy, who looked the visitors’ most dangerous attacker, hit the ball over the keeper’s head, putting the visitors back in the driving seat. Moments later the same player hit a thunderous free from 25 yards, crashing against the post, a let off for City.
From that moment until the end of the game Crumlin Star never looked like giving up the lead and finished the game on top to progress to the next round.
It was a disappointing end to the game for the young Armagh players as at one time it looked as if they might well succeed in winning this cup tie, but it is a learning process for the side against stronger and more experienced sides that they are coming up against in these competitions.
This week’s game sees Banbridge Town visiting Holm Park in the rescheduled Bob Radcliffe quarter-final, with kick-off at the usual time of 3pm.