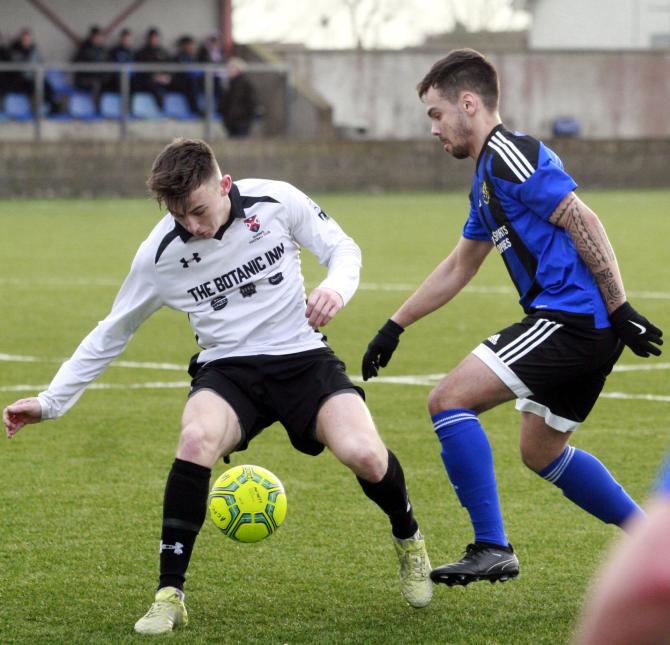 Caio Lobo levelled for Armagh City on Saturday to take the match into extra-time at 1-1.

CITY were knocked out of the Intermediate Cup after conceding two late goals in extra-time to Queens University after a hard fought game in which the City defence kept the visitors at bay and at one stage looked like they would pinch a win, despite being on the back foot for a large portion of the game.

The home side were missing several of their more experienced players due to work and being cup tied. The game was barely three minutes old when the Students scored took the lead, a loose pass in midfield was played down the left side of the penalty box and Danny Devine in the home goal had to make a 50/50 tackle with a Queens forward and after the ball spun into the air, it bounced away from a City defender as he tried to clear and left Ciaran O’Hare to score from point blank range.
The visitors took command for the next 15 minutes and may well have overrun Armagh but for several brilliant tackles and interceptions from Conor McAnallen, recently signed from Lurgan Celtic, ably supported by Ultan Lennon and from then on the home side played their way back into the game.

David Courtney made a fine interception when Queens tried to break upfield and with the Students keeper off his line, Matthew Hynds tried a speculative shot from all of 40 yards and it just went wide.

Although the strong wind was in City's favour it was swirling and caused problems all over the pitch, but City battled bravely to keep the score the same going in at half-time.
After the interval, the home side were guilty of some wayward passing as they tried to take advantage of the possession they gained as Queens attempted to make the wind advantage count.

Edilson Tavares then replaced Jake Keegan in the 55th minute and four minutes later the change paid dividends as Tavares fastened onto a pass and sped down the left wing, before cutting along the bye line leaving two defenders in his wake and laid off a pass to Nedos Miculaitis who in turn placed the ball back to Ciao Lobo and he rifled the ball home to level the tie.

Queens then applied pressure and in one break McAnallen made a tremendous block to clear upfield and the Students kept ferocious pressure on the City defence, but Devine pulled off several great saves and the back four stood firm as the game went into extra time and possibly penalty-kicks.

The first half of extra time saw Lee Campbell replace Hynds and Lennon limped off to be replaced by Eoin Fields. City then had their best spell as they forced two corners and Tavares fired over but Queens missed several openings themselves and the first period ended scoreless.

The second-half of extra time was three minutes old when the visitors re-took the lead after McAnallen was adjudged to have fouled a player as he came away with the ball when it looked that the foul was against the City player and as the City defenders set up, the free-kick was played low and short to a player who promptly crossed low and Ryan McCready slotted home from close range.

City fought back to try and force a penalty shoot out but were caught out as they went upfield and from the right a low cross was dispatched with ease by Sean O Reilly with virtually the last kick of the ball to send them through to the next round.

Although missing several key players the young City side didn't buckle down to their more experienced opponents who are 2nd in the table and on another day might have snatched a win. Although it must be said the Students made life difficult for themselves by spurning several good chances to complete the tie before extra time and great defensive work from Devine, Lennon and in particular Mc Anallen ensured they had to work hard for the win.
Next week its back to league action as City travel to Belfast to play Donegal Celtic with all kick-offs now back to 3pm for the rest of the season.