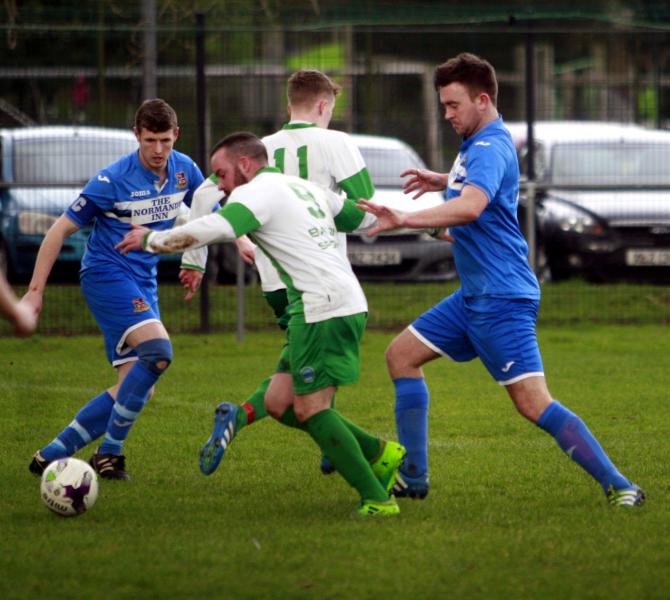 Manager Marty Rice entered the contest knowing that a victory was crucial in the scramble for league survival and his side started positively with Adam Nesbitt and Paul Greenaway going close with early goal scoring chances. Barry Quinn also looked lively during the opening exchanges but he failed to get the better of Rovers ‘keeper Joe Goodwill.

AFC continued to enjoy the majority of play during the first half with Rovers appearing content to settle for the point with their well marshalled defence. Richhill’s debutant ‘keeper Max Krustins, standing in for the unavailable Aaron Wright, was rarely troubled throughout the match but he did well to block a close range effort from O’Rourke just before the interval.

The second half started with the villagers continuing to push forward in search of that all-important goal, however Rovers continued to defend well and looked lively on the counter attack.

With both sides needing a victory to move away from the bottom of the table, Rovers proved more adventurous over the closing stages of the match, however it was Nesbitt who proved to be the match winner with a fantastic 20 yard strike into the top corner of the net on 77 minutes.

Rovers pushed hard over the closing stages in search of the equaliser but strong defending from Dodds, Finlay, Hewitt and Harper ensured that Krustins protected his clean sheet.

Overall, a deserved victory for Marty Rice’s team but Camlough made the villagers work hard for their victory with David Ross earning the man of the match award while substitute Mark Lucas also impressed. The villagers will be hoping that their recent good run will continue when they host Ballymacash Rangers this Saturday (Kick Off 2.15pm).