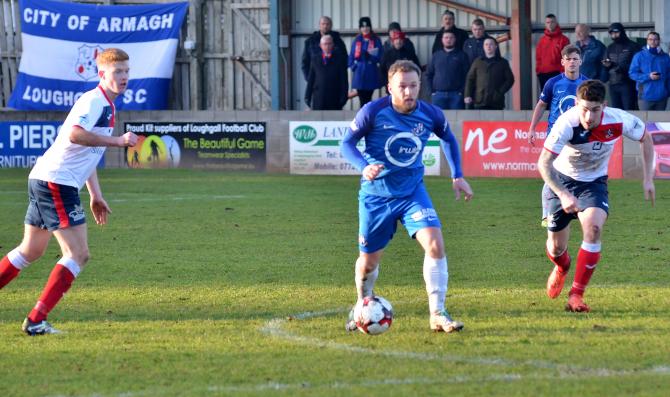 Marcus Dallas looks for a teammate to pass to. KT180684

LOUGHGALL manager Dean Smith couldn’t hide his euphoria after watching the Villagers book their spot in the quarter-final of the Irish Cup, as well as securing a top six place in the Bluefin Sport Championship.

On Tuesday evening, Loughgall knew a point would be enough to finish in the top six, but emerged with a 5-1 win, before earning an Irish Cup upset against Ards last weekend.

“We said after losing to Portadown that we wanted to go on a run and try and force our way into the top six,” Smith said.

“Thankfully, we managed to do that and it’s a fantastic achievement for the club.

“It was a real test of character for the players at Dergview as a point would have been enough and you’re fearful that the players might mentally switch off.

“However, it was the complete opposite, we dominated the game and should have scored more goals.”

On Saturday, Loughgall welcomed Ards to Lakeview Park and were victorious as Ricky Copeland’s last minute goal earned a quarter-final spot for the second time in three years. However, the game was marred in controversy as the visitors ended the match with eight men, but Smith believes his side fully deserved their win.

“I thought we were the better team throughout the match, even when Ards had 11 men on the pitch,” Smith added.

“We made the worst possible start by conceding inside the first minute and your team talk goes out the window. As a team, we are little bit disappointed by the early goal as it’s becoming an Achilles heel for us.

“That being said, I must give credit to the players for bouncing back and getting into the game.

“When the opposition goes down to 10 players it is difficult to break them down, and then when they were reduced to 9, I didn’t know what decision to make.

“Once the third player was dismissed, it turned into a training match, we had a lot of possession and we wanted a winner.

“To be honest, I wanted to get the players in at full-time to settle them down, but Ricky’s late goal saved me 30 minutes of anguish.”

Smith was ‘delighted’ for everyone involved at the club and is relishing taking on Glenavon in the quarter-final at Mourneview Park.

“I am delighted for the players, Board and everyone at the club,” Smith continued.

“The work that goes on in the background is often over looked, but I know first hand the amount of time people put in.

“The excitement of that last minute winner was brilliant, even though we had five strikers on the pitch and I had to re-organise our formation.

“The quarter-final will be a great day out and we will go and enjoy it. Mourneview Park is a great place to play football.

“Gary Hamilton has done a fantastic job there and had built up a great reputation.

“We realise it will be tough and we will need them to have an off day, if we are to progress.”

Smith also pounced late in the transfer window with the re-signing of striker Paul McDowell from PSNI.

“I played with Paul at Loughgall, so I know what he will bring to the table,” Smith stated.

“We have no back-up to Nathaniel Ferris and Gary Liggett at present, so we are delighted to finally have that.

“He is a fantastic player, has an intelligent touch, good at holding the ball up and a winning mentality.

“His goal scoring record at this level is right up there with the best, so it is a good capture for us.

“I’m really happy to get the new signings on board and I’m sure they’ll have a part to play in the second half of the season.”