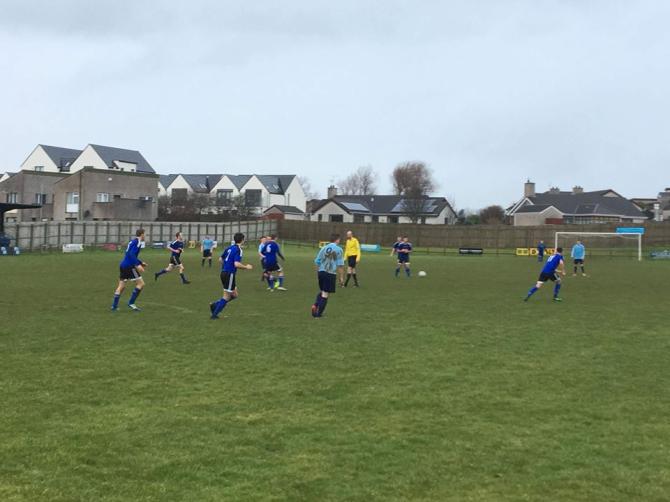 Armagh City in action against Portstewart on Saturday, when they were beaten 1-0 by the home side.

ARMAGH City  travelled to Portstewart in a quest for three points to consolidate their place in the top six.

And new signing Andy Wilson along with Eoin Fields were drafted into the starting 11, with Conor Kerr and Caio Lobo dropping to the bench as City started with their tallest side this season.

Conditions were bleak and the grass on the playing surface was extremely long in places making it impossible to play attractive football.

The game started with City having the advantage of playing with a blustery wind at their backs but it soon became apparent that the surface would present problems as some players lost their footing when trying to turn at speed.

Both sides spent the opening 15 minutes probing for an opening but neither keeper had a shot to save, although after a Portstewart corner he lost control of the ball as he was impeded, but the danger was quickly cleared. It should have been a free kick to City.

In one break two City defenders fell on the slippy surface as they went to clear the ball but the danger was quickly cleared and as City went upfield, Fields fed Nedos Maciulaitis who in turn passed to Paudie Judge, who in turn played a cute return pass, but the young striker was blocked as he went to shoot. Judge had a run and shot but couldn't generate enough power so the keeper took it easily and just prior to the break Portstewart broke upfield when a City defender lost his footing, raced through but was tackled by a city defender and the ball went wide, with the home section calling for a penalty, but the referee waved play on as the half ended in stalemate.

Courtney replaced Luke Grimley at half time as the defender had strained his groin and City looked more positive in attack but went behind on 51 minutes after they failed to prevent a cross coming from the right and winger Luke McDowell stooped to head past the exposed Danny Devine.

Stung by this setback City took control and should have equalised when a corner was delivered into the six yard box, and as it was hacked away it fell to Luke RUssell but the City centre back blazed wildly over the bar with Portstewart at sixes and sevens.

Jake Keegan then made way for Lobo as City searched for a breakthrough but by now the pitch had taken a pounding and any attempts to play football got bogged down in the mud and, despite dominating possession, City were unable to make the breakthrough to equalise and finished pointless and scoreless as the game ended.

This was a game City should have taken something from and with eight games, four home and four away, points are urgently required to stay in the top six after the split, so it's important to start taking advantage of chances that are presented.

This week City are on the road again to play Tobermore United, kick off 3pm.