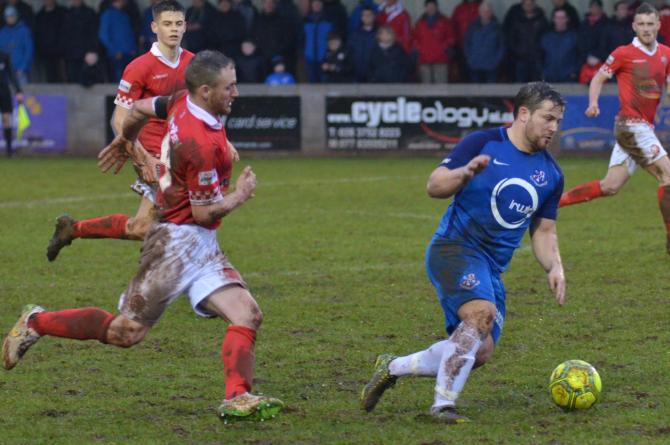 However, Smith was quick to praise his squad’s ‘commitment and desire’ as they suffered their fourth defeat of the season to the Ports in all competitions.

“I was delighted with the effort, commitment and desire of the players,” Smith said.

“We didn’t deserve to be beat and should have been ahead in the first-half.

“The weather meant the second-half was played in difficult conditions and that suited Portadown more.

“There wasn’t much football played after half-time, but I’m sure Niall Currie and Portadown don’t mind about that as they got the three points.

“I couldn’t have asked for any more from my players.”

Loughgall fell behind to a goal scored after two minutes and Smith is getting frustrated with his side conceding early goals.

“We spoke to the players throughout the week about keeping it tight for the first 10 or 15 minutes,” Smith added.

“We gave away a cheap free-kick and the ball ends up in the back of the net as we failed to pick up our runners.

“It’s becoming an Achilles’ heel for us at the minute as we don’t switch on as soon as the match kicks-off or at the start of the second-half.

“This always leads to us facing an uphill battle as we simply aren’t concentrated.

“I was pleased with our response, we dominated the first-half and Portadown would have been happy to have gone in level.
“We had a few half chances in the second-half, but the pitch cut up badly and little football was played.”

Smith was delighted to see his strikers on the scoresheet once again as Nathaniel Ferris popped up with a strike in the first-half and Gary Liggett played through an injury complaint.

“Nathaniel has been a real find for us,” Smith continued.

“He has all the attributes and determination to be a top striker, but still needs polished in certain areas of his game.

“His enthusiasm spurs on the team and he is a proper athlete.

“Gary helps out Nathaniel a lot and is brilliant at leading the line.

“We are delighted with the both of them and they caused Portadown plenty of problems.

“Gary was struggling with a slight groin strain, but played an hour on a heavy pitch which shows the character he has.

“We are happy with the partnership that is blossoming between the two.”