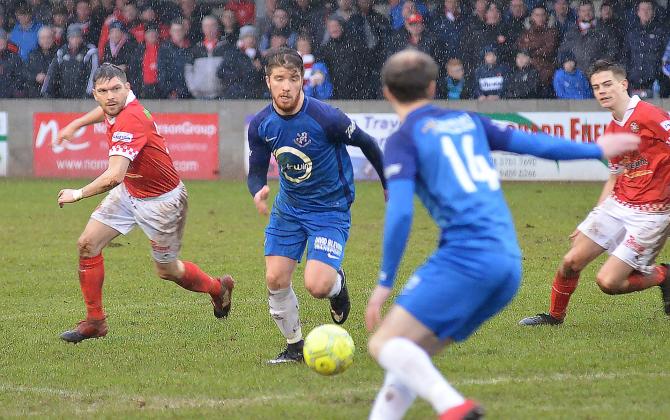 Conor Mullen (centre) in action for Loughgall at Lakeview Park.

PORTADOWN emerged victors from a sodden Lakeview Park and put an end to Loughgall’s recent good form that culminated in the Villagers progressing to the Tennents Irish Cup quarter-finals.

Two goals from Luke Wilson saw Niall Currie’s side pick up all three points as they battle to secure promotion.

The visitors made the perfect start as they were ahead after only two minutes when Luke Wilson guided Chris Lavery’s free-kick delivery past Loughgall ‘keeper Gareth Buchanan.

Loughgall responded well to losing an early goal and began to create some excellent opportunities. On nine minutes Jude Ballard played Conor Mullen through on goal however the winger’s low shot missed the target.

The Ports were a constant threat on the counter-attack with the pace of Chris Lavery, and on 13 minutes he raced onto Adam Salley’s pass before drawing an excellent low save from Buchanan.

Loughgall levelled in the 23rd minute through a fine lob from Nathaniel Ferris as he beat outrushing Portadown ‘keeper Chris McGaughey and applied a great finish.

The away side started the second half brightly and restored their advantage on 54 minutes through a fine strike from Wilson for his second goal of the game. He picked up a loose ball on the edge of Loughgall’s penalty area before working space to fire into the top corner.

On 72 minutes, Lavery threatened again when he fired a low shot from inside the area that forced ‘keeper Buchanan to tip it past the post.

Loughgall struggled to create any clearcut chances during the remainder of the game with Andrew Hoey going closest with a snapshot from 20 yards that was safely held by McGaughey.