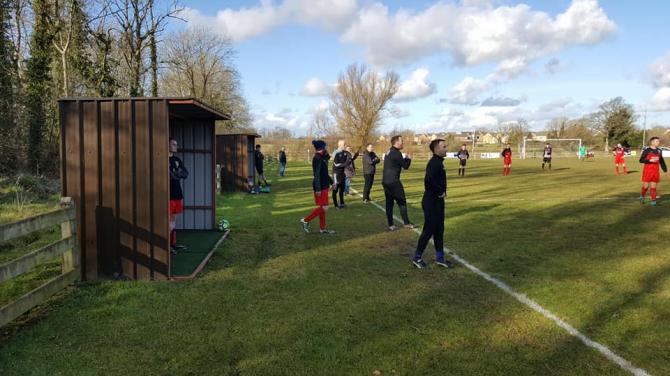 LAURELVALE  secured a massive three points in the top-of-the table clash in the Mid-Ulster Intermediate B league after a hard fought 2-1 win over Bourneview Mill at Pepperton Park.

It was the home side who managed to take an early lead when Jackson Nesbitt burst through the Laurelvale defence, only to be hauled down in the box and Geoff Neill dispatched the resulting penalty. However, moments later, Bourneview Mill were reduced to 10 men when Geoff Neill was shown a red card for a challenge in the centre circle.

Laurelvale then had a 15-minute period in the game when they made their extra man advantage count. A lovely sweeping move was finished off when Aaron Black powered home from 18 yards just before the half-time whistle.

The second-half started as a more even affair with Bourneview Mill giving as good as they got, but with Laurelvale having the extra man advantage Bourneview stopper William McKinstry was the busiest of the two ‘keepers pulling off several top quality saves.

However the visitors would take the lead via the penalty spot after Tom McClelland was adjudged to have fouled a Laurelvale attacker inside the area. The spot kick was duly dispatched by Dan Raymer in the left hand corner of the net with 15 minutes remaining.

Bourneview Mill freshened it up with a few substitutes and were well in the game until another sending off as Gary Haugh received his marching orders after two yellow cards.

After a great move involving Gary Hill, Mark McKee and Mark Boyce down the right hand side, the home side were unlucky not to equalise.

A big crowd came to watch and provide support for both teams, especially Laurelvale who secured a massive result at this stage of the season. This means they now top the table by five points with seven games remaining.

Laurelvale’s man of the match was Marcio Soares who was a constant threat with his incisive running and won the penalty that secured the victory.