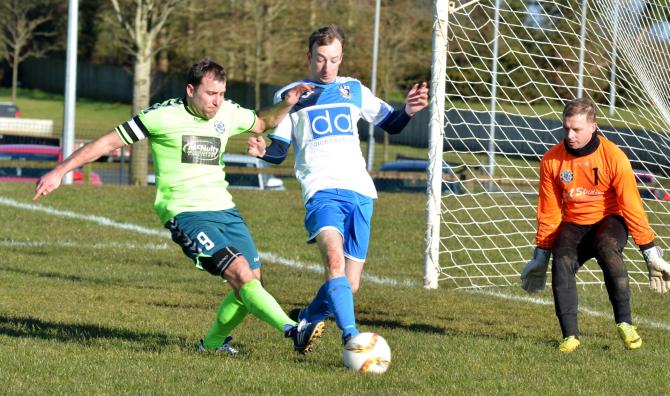 ARMAGH Blues fell at the final hurdle in the coveted Beckett Cup on Saturday in what was a very keenly contested semi-final with fellow Armagh side United LT.

A sizeable crowd had made the effort to come and watch the local derby and they were certainly entertained as both teams set about their task with great vigour. Indeed, the opening 12 minutes saw four goals.

The Blues took the lead when Dobbs’ corner was met at the back post by Breakey who rose highest to head in.
But LT responded within a minute when their forward had time and space and he finished low into the Blues net.

The pace of the game was high in the early exchanges. The Dobbs brothers then combined, skipper Gareth found younger brother Michael, on the right. His driving run was matched by his thumping finish high into the LT net, but to their credit the
day’s hosts were level again within five minutes.

Both sides continued to have a real go at each other and there was a definite Cup feeling to the match; chances were being created and both goalkeepers were being worked hard.

United LT took the lead for the first time when they converted from the penalty spot and the local lads knew it was going to be a tough task to turn the game around knowing full well how disciplined and hard working their hosts are.

The second half began and it was clear that the city Blues had taken the advice given at the break on board. They moved noticeably up the pitch and were causing LT all sorts of problems without carving out a real clear goal scoring opportunity.

United LT did not look their usual composed selves as the Blues set about trying to level the contest. With 10 minutes remaining the Blues’ big chance came and in truth Maguire was very unfortunate to see his header clip the top of the bar, Wells saw his rasping shot blocked and LT to their credit were fighting hard to prevent an equaliser.

The final whistle sounded and it was anguish for the city Blues as LT progressed to the final where they will face double
chasing Annalong at Holm Park, Armagh.

It just was not to be for Mulligan’s team who fell at the semi-final stage for the second year in succession.