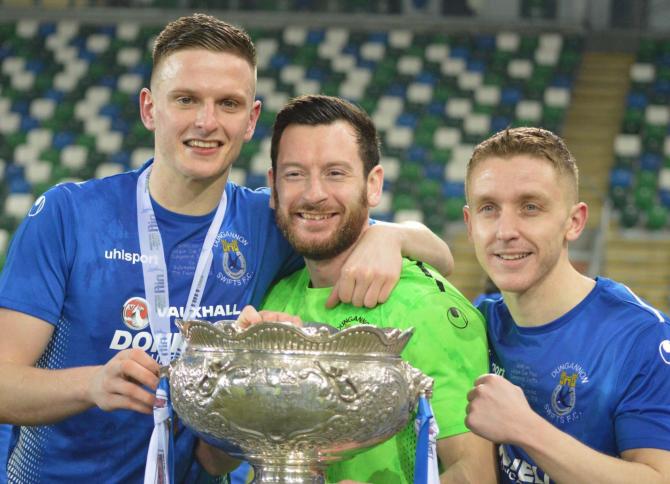 MARKETHILL  duo Dougie Wilson and Ally Teggart had plenty to cheer this weekend as they helped guide Dungannon Swifts to their first ever League Cup crown.

Both players were used substitutes in the 3-1 win over Ballymena United and the success was the Swifts’ first senior trophy since 2002.

It was a deserved victory for Rodney McAree’s men and Wilson was ‘delighted’ to collect his first piece of silverware in senior football.

“As a club we are delighted with how the final went,” Wilson said.

“It could have been easy for us to drop our heads after conceding, but to be fair the boys battled hard and deservedly won.

“For us to lift the trophy is great and it was brilliant to do it for Rodney McAree and everyone involved with Dungannon Swifts.

“It’s the first senior trophy of my career and I hope it’s not the last.

“It was a proud day for me and my family, but I want to kick on and make days like this more often in my career.

“We had to beat a lot of good teams to lift the cup and that’s what makes our success even more sweet.

“The feeling when the final whistle blew and I held the trophy will stay with me for the rest of my life.”