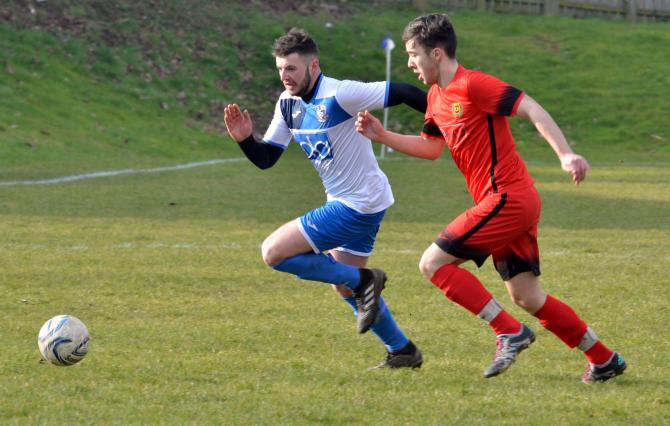 The home side were slow to get going and didn't look particularly cohesive in the first fifteen minutes. The travelling Dons had a clear game plan to sit deep and they were able to keep the Blue men at bay. Without being really stretched, indeed both defences were well on top with neither keeper being busy in this period.

But on the half hour mark, the Armagh side forced a series of corners and the pressure finally told when a delivery from skipper Gareth Dobbs was met at the back post by the influential Cooke who headed Armagh into the lead. From then on the local side had the lion share of the play and were well in control of the game.

Despite this, there were signs of frustration as their normal passing game lacked its usual pace and accuracy. In the players defence the playing surface made it difficult for both sets of players to play a good style of football. Winger Wells forced two excellent saves from the visiting keeper and it remained one nil at the break.

The second half began and there was much more tempo in Armagh’s play. Youthful pair Jason Ross and Michael Dobbs really got motoring up the right and both were finding themselves in good crossing positions. Veterans Cooke and Calvin were bossing the midfield and Gareth Dobbs was starting to pick holes in the Lisburn backline. On the hour mark, the second goal finally came when last season’s young player of the year Michael Dobbs showed great vision to lob the stranded Lisburn custodian from thirty yards.

The Dons got back into the match when the Blue backline failed to react to a fine save and the Lisburn substitute knocked the ball into the net. The Blues game management was very effective at this point and the move of the match was rounded off superbly by Johnston whose diving header found the roof of the net at the Barrack Hill end. Next week the Blues face league newcomers Glenavy Youth at the Millfield. Fingers crossed the pitch will have received some much needed attention.