City are edged out by Moyola Park 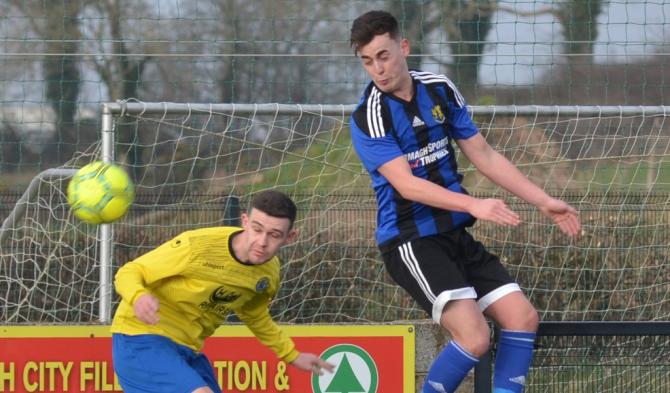 AFTER  the disappointment of losing out to a last minute goal against leaders Dundela last Tuesday night on the back of some debatable refereeing decisions, City were back on home surroundings to entertain Moyola Park in a bid to stop sliding further down the table to a side, who with games in hand, could break into the top three. News prior to the game was that Ultan Lennon was out of the squad due to picking up an injury in the midweek game along with Conor McAnallen who also came off against Dundela and his injury (knee ligaments) have ruled him out for the rest of the season. Luke Grimley and Jack Clarke were both suffering from groin injuries and were also unavailable, although Clarke is hoping to return to action next week so once more enforced changes were needed with Ciao Lobo slotting in at centre half alongside Luke Russell.

The match kicked off with City playing against a strong sun but they were soon on the offensive and some good moves offered hope for the game as they kept the pressure on Moyola as Keegan hit a long range shot which was just too high and Nedos Miculaitis, Paudie Judge and Andy Wilson starting showing up well in taking the game to Moyola. However a frustrating feature was City’s inability to take advantage of a number of free kicks awarded to them in and around the visitors penalty area and they paid the price on 32 minutes when a free kick was collected easily by the keeper and he played the ball down the right side to an attacker who scurried down and crossed low across the City 6 yard box for Danny McIlhatton to score past Danny Devine in the first meaningful attack they had. Stung by this setback City applied more pressure but they huffed and puffed without any goal threat despite gaining several more free-kicks and the first-half ended with the visitors a goal to the good.

Moyola started the second period in an attempt to double their advantage and in one attack fired in a dangerous free-kick which Lobo headed clear for a corner which Devine punched clear under an aerial assault to clear the danger and keep his team in the game. Despite good approach play, City were unable to breech the Moyola defence as they gained the upper hand. David Courtney was replaced by John Uprichard in a bid to add more attacking threat for City but frustratingly they still failed to make any gains in their bid to at least equalise. Moyola did have some sporadic breaks but the home defence dealt capably with them and later in the game, Jake Keegan made way for Thomas Huston in a bid to freshen things up as City continued to press for a goal and despite having the lions share of play overall in the game, City were unable to stop a run of four league defeats in a row and they now sit in 8th place with the chances of a top 6 finish when the split comes looking less likely than at the start of the year.

This Saturday, Lisburn Distillery are visitors to Holm Park (KO 3pm) and this is probably the last Saturday home game before the split as it looks likely the the Banbridge Town game scheduled for St Patrick’s Day will be brought forward to Friday night 16th March but this should be confirmed next week. The other three games are away at Sport and Leisure,Queens and Moyola Park and there are still 15 points to play for. The display against Dundela midweek showed the Armagh City have the ability to mix it with the top teams in the league and other than the poor showing against Tobermore no side has given City a bad defeat despite the squad starting from scratch at the beginning of the season.