Loughgall settle for a point 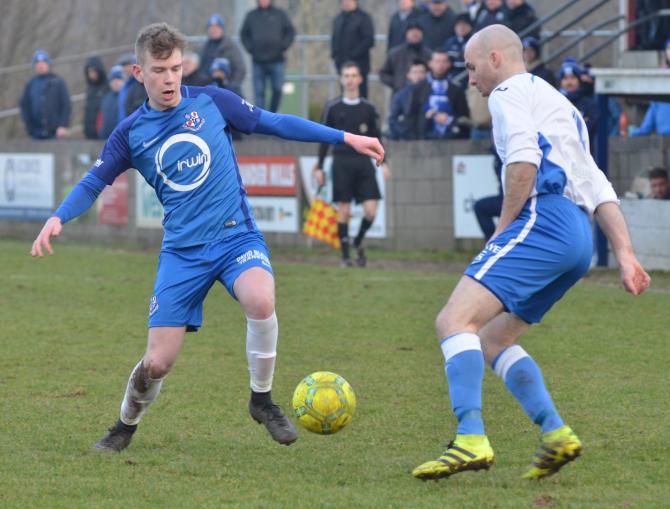 Action from the Loughgall vs Newry game on Saturday at Lakeview Park. KT180982

LOUGHGALL  put a stop to Newry City’s recent winning run with a dogged performance at Lakeview Park. Marcus Dallas had given the hosts a half-time lead through a long-range strike but Decky Carville equalised for Newry from the penalty spot shortly into the second period.

Newry had the first chance of the game after six minutes when Carville forced a good save from Loughgall ‘keeper Gareth Buchanan as he shot from a narrow angle.

The Villagers opened the scoring on 15 minutes when Dallas picked up a loose ball in midfield before running 20 yards and seeing his deflected shot loop over City ‘keeper Stephen Maguire.

The visitors rallied well and began to take control, and they came close to scoring in the 33rd minute when Jimmy Walker’s corner was met by Carville however his headed effort was cleared by Peter Campbell excellently positioned on the goal line.
City did level in the 52nd minute when home defender Mark Stewart fouled Mark Hughes who had burst through into the penalty area. Carville cooly stepped up and sent Buchanan the wrong way from the resulting spot-kick.
F

or all their possession Newry struggled to further break down a resolute Loughgall rearguard. Mark McCabe fired wide from 20 yards on the hour mark when he managed to evade the close attention of central defenders Stewart and Ricky Copeland.
Loughgall came close to snatching victory late into injury time when substitute Marc McConnell’s low cross to the back post was agonisingly just too strong for Gary Liggett sliding in.