Quarter-final tie will be a great occasion for the club: Smith 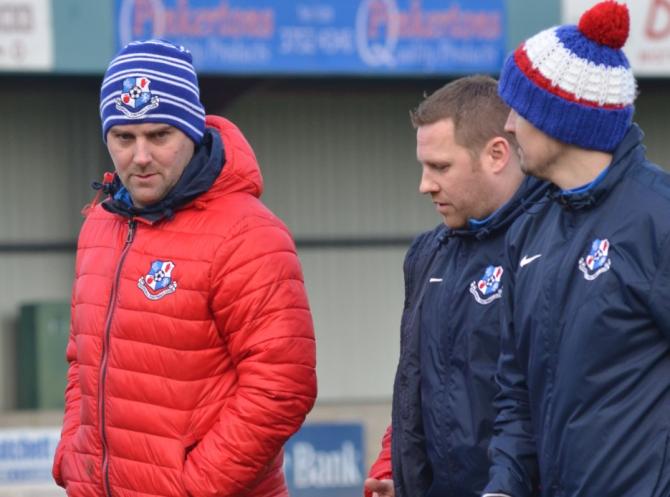 Dean Smith left) is looking forward to this weekend's clash against Glenavon.

DEAN  Smith believes this weekend’s Irish Cup quarter-final clash against Glenavon will be a great occasion for the club.

The Villagers travel to Mourneview Park as massive underdogs, but Smith insists his players will be up for the challenge.

“We are going into this game with nothing to lose,” Smith said.

“We have bit of confidence from our last three performances which I feel we merit more points from.

“When I was manager of Annagh we defeated Glenavon in the League Cup on penalties, so I’d take a repeat of that!

“It is important that we organised and disciplined, but you never know what can happen in cup games.”

Loughgall have already eliminated Premiership opposition in Ards and Smith is hoping his players can replicate that performance.

“We played very well against Ards and that has to be the template for Saturday,” Smith added.

“Even though they had 8 men, we were the dominate team when they had 11.

“We know the quality that Glenavon possess and they are a threat upfront.

“Gary Hamilton has done a fantastic job there and are one of the top teams in the country.”

Smith spent over 10 years at Mourneview Park as a player and admits it will be a fantastic day out for everyone connected with Loughgall.

“It’s fair to say Glenavon has been a big part of my life, but I’m here at Loughgall to guide us into the semi-final.

“It means a lot for the players and everyone associated with the club to be in this position.

“Importantly the fixture is a big chance for our players to test themselves against some of the best in the country.”

The two sides met in the same round of the competition in 2016 with Glenavon edging out Loughgall 2-1 in Lurgan.

Declan O’Brien gave Glenavon a first-half lead, which was doubled after the break via an Andy McGrory penalty.

However, despite being down to 10 men, Loughgall fought back when Stuart Mallon reduced their arrears.

The Villagers couldn’t manage to force the game into extra-time, but know they can take heart from that performance two years ago.

If Loughgall pull off an upset, they could face the likes of Linfield, Cliftonville or Coleraine in the last four.