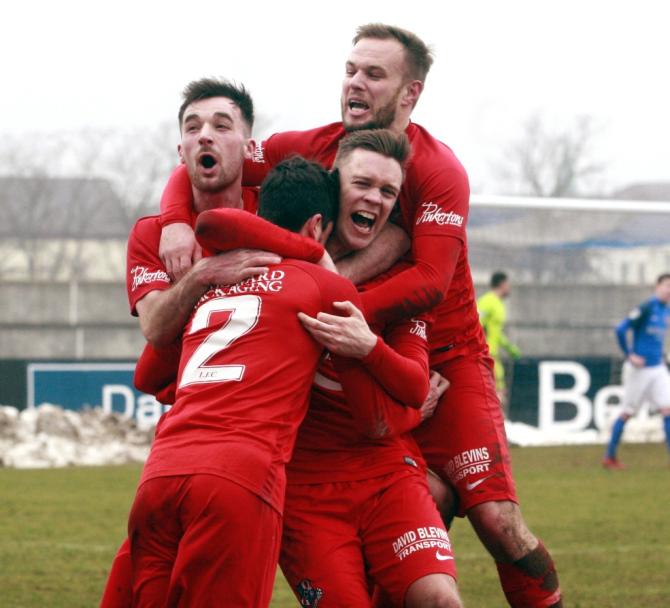 Loughgall stunned the Lurgan Blues in the Irish Cup on Saturday, making their way into the semi finals with a 2-1 win. ND181003. Photo: Naomi Drury/Ulster Gazette

LOUGHGALL  will compete in their first Irish Cup semi-final since 1997 as they defeated Glenavon in an enthralling tie at Mourneview Park.

Goals either side of the break from Dale Montgomery and Gary Liggett were enough to secure their passage through to the next round, despite James Singleton netting a late goal for the Lurgan Blues.

It also means that Loughgall are the first side to defeat two top flight clubs in the competition since 2006 when Bangor eliminated Limavady United and Lisburn Distillery.

Speaking after the game, Loughgall boss Dean Smith believes the win is just rewards for all the hard work at the club.

“I didn’t realise that Loughgall had already reached an Irish Cup semi-final until this morning,” Smith said.

“It’s a great recognition for the club and players, but also for the people who work tremendously hard behind the scenes.

“I’m delighted for them because more often than not all that hard work goes unnoticed.”

Despite playing in the league below Glenavon, Smith insisted his game plan was always to progress to the semi-final.

“First and foremost, the game plan we set out was to win and not be there to make up the numbers,” Smith added.

“We spoke to the players on Tuesday and Thursday night about a game plan, but we felt there wasn’t much point coaching players to sit in and defend when they aren’t coached like that throughout the year.

“We’ve got to believe in what we are doing with the players in terms of coaching and you want to go out and try and play a bit of football.

“I thought for parts of the game we were very good football wise and that’s what we want – our players to express themselves.

“I believe we were the better team for at least 45 minutes.

“In the second-half, Glenavon came out and put us under a lot of pressure, but we defended magnificently.

“We are delighted as it’s a momentous occasion for the football club the fans, players and everyone involved.

“I’d have certainly taken that result this morning.”

After watching his side miss a first-half penalty, Smith was happy to see his players take the lead via Dale Montgomery’s arrowed finish, before doubling their advantage with 11 minutes to go.

“I was relieved to see us scoring from the resulting corner kick as it arrived at the perfect time.

“It was a great finish from Dale and it gave us a lift.

“The second goal was also at a great time because it allowed us to soak up some pressure.

“We knew Glenavon are a good team and would throw everything at us and they did that.

“Thankfully we held on.”

Smith paid tribute to reserve goalkeeper Craig Robinson for his inspired performance between the sticks.

“He was fantastic,” Smith stated.

“Craig was a bit unfortunate because he got called-up late as our other goalkeeper Gareth Buchanan was in hospital as his wife was giving birth.

“He has great hands, is a good speaker and will only get better.”

With Loughgall’s fixture the only game to survive the wintery conditions, the Villagers must wait until the 13th March to find out their semi-final opponents.

“No matter who we draw it will be a great fixture for us when you see the clubs still left in the competition,” Smith concluded.

“It has been a fantastic journey to get to this stage, but we will sit back and see who we will face.

“You never know, it could just be our year!

“We will look forward to the semi-final when that day arrives.”