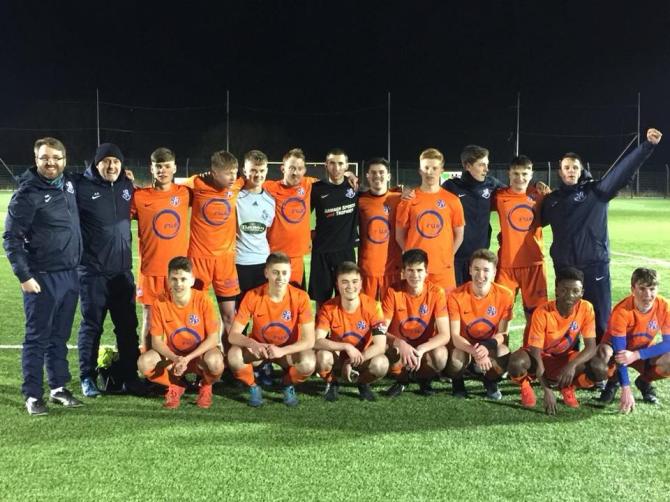 The Loughgall under-20 squad who have reached the final of the Mid-Ulster Shield. SG1073. Picture courtesy of Loughgall FC Facebook page.

WHAT a week it has been for Loughgall Football Club.

The first-team defied the odds to reach the Irish Cup semi-final, but the under-20 side haven’t done too badly either.

Davy Johnstone’s players have reached the final of the Mid-Ulster Shield for the first time since 1978 after beating Hill Street last week.

Despite falling behind in the first-half, goals from Jason Dickson and Matthew Russell ensured the Villagers will have a chance of glory on Easter Tuesday.

“Hill Street are one of the best junior sides in the country,” Johnston said.

“They have a number of former Irish League players in their ranks and were heavy favourites to beat us.

“However our boys had different ideas. It was an entertaining game and we have now beaten four men’s teams to get this far.

“It was nice for the players to up their game and produce a performance in front of a good crowd.

“The only complaint would be that we should have won more comfortably, but I’m really pleased for the players.

“On behalf of everyone connected with Loughgall, we would like to thank club physio Lyndsay Henning for coming before the game to patch up some of the players with knocks.”

Loughgall Reserves are on a good run of form and remain unbeaten in the league since August, but Johnstone and his backroom staff are taking it one game at a time.

“We are on an incredible run and we haven’t been beaten in the league since August,” Johnstone added.

“If we win our games in hand, we will close the gap at the top on Portadown.

“We are sitting in a good position, but we need to pick up points and we will take it from there.

“The squad is full of good kids, who work hard and are learning week by week.

“We want them to realise the difference between youth football and senior football where results matter.

“My backroom staff is excellent, Alfie Stewart and David Harvey have implemented that winning mentality and game management into the players.

“That was evident last week after falling behind as the players could have caved in, but they rolled their sleeves up and got themselves back into the match.”

Johnstone insisted that his side are playing for their cup final shirts and hopes they can bring the trophy to Lakeview Park for the first time in the club’s history.

“The fixture will provide great experience of being in a final,” Johnstone continued.

“The team are fighting for their shirts and they know this.

“The last time Loughgall reached the final of the competition was in 1978, committee member John McCann and club stalwart Alan Robinson played in a 1-0 defeat to Rathfriland.

“Our aim is to go one better and bring the Shield back to Lakeview Park.”

Johnstone and his staff have only been involved with the Reserves since the start of the season, but admits he is enjoying working with the players at his disposal.

“The club on a whole is in a good shape and everyone is buzzing from the first-team right down,” Johnstone concluded.

“We only arrived this year and had to find our feet.

“So far this season we have suffered two-long term injuries and two players have been promoted to the first-team, so we are down four players.

“We had no first-teamers available for the win against Hill Street and when you take into the account the players we were missing, it was a fantastic result.

“The players have a great attitude, they never give up chasing the ball, the work ethic is second to none and they are keen to learn and apply themselves.

Loughgall will play the winners of the other semi-final between Redstar and Coalisland Athletic on Easter Tuesday (KO 11am). The venue is to be confirmed once the other match has been played.