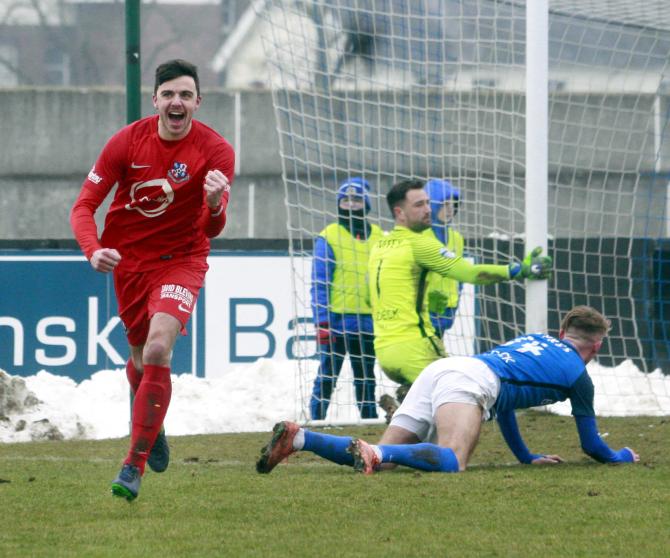 LOUGHGALL  caused an Irish Cup upset by defeating Glenavon and earning a spot in the semi-final of the Tennent’s Irish Cup.

A first-half strike from Dale Montgomery gave the Villagers the lead at the break, before Gary Liggett pounced with 10 minutes to go to double the advantage.

Despite James Singleton pulling a goal back for the Lurgan Blues, Dean Smith’s side held on for a famous victory.

Before a ball was kicked the Glenavon supporters and officials produced a mammoth effort to clear the snow from the playing surface and after two pitch inspections, the match was given the go-ahead.

The first chance arrived on five minutes when Andrew Hoey cut in from the by-line and evaded the challenge of Caolan Marron, but the striker’s effort was easily gathered by Jonny Tuffey.

On the hour mark, Glenavon striker Andrew Mitchell was afforded too much time inside the box, but his turn and shot went over the bar.

However, on 36 minutes Loughgall were awarded a spot kick as Josh Daniels committed a clumsy foul on Peter Campbell. Up-stepped Liggett but his penalty was saved.

From the resulting corner-kick, the Villagers took the lead as Dale Montgomery blasted home at the back post.

The Lurgan Blues dominated proceedings in the second-half with Mitchell, Sammy Clingan and Mark Sykes all coming close to finding an equaliser.

On 80 minutes, Liggett and Loughgall doubled their lead as the former Glenavon man pounced from close range after Nathaniel Ferris’ shot was cleared off the line.

Five minutes from time an ugly brawl broke out close to the Loughgall dugout when Singleton was preparing to take a throw-in. Referee Tim Marshall dismissed Stefan McMaster from the Loughgall bench and Simon Kelly from the Glenavon one.

Glenavon pulled a goal back in the 89th minute when Singleton headed in Foley’s corner, but Loughgall held on to book their spot in the semi-final.