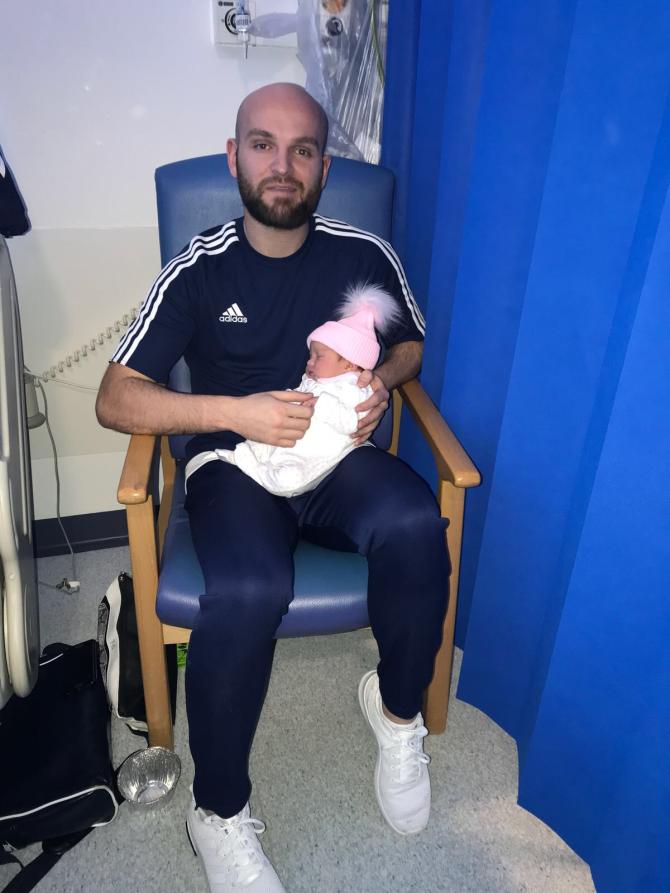 LOUGHGALL goalkeeper Gareth Buchanan faced one of his biggest decisions to date two weeks ago.

The 26-year-old was in line to face Glenavon in the quarter-final of the Tennent’s Irish Cup, but his girlfriend Emma was brought into labour at Craigavon Area Hospital.

Despite itching at the bit to face the Lurgan Blues, the former Newry City and Dungannon Swifts shot stopper remained at his girlfriend’s bed side as his daughter Parker was born.

“I was gutted to miss the match as I’m bit of a Glenavon fan,” Buchanan said.

“I was really looking forward to it and was getting a bit of stick from Glenavon supporters that I work with.

“We were given a birth date and I knew I’d be missing the game, but Emma and her family wanted me to play.

“However I felt like that we wouldn’t be the right thing to do as Emma was in pain and family always comes first.

“I think Dean Smith wanted me to play, but I agreed I’d let him know what was happening.

“Thankfully he understood my situation.”

Buchanan admits he hasn’t got much sleep since taking Parker home, but is ‘over the moon’ that his newborn daughter is healthy.

“Emma and Parker were released from hospital last Tuesday and everything is good,” Buchanan added.

“They are both perfect and healthy and that’s the main thing.

“We are over the moon that everything has went well, but I’m eager for a good night’s sleep!”

The likeable Gilford man was updated with proceedings from Mourneview Park on his mobile and hailed his team-mates for securing an unlikely result.

“I was listening to the match on the radio and the nurses didn’t seem to happy with me as Emma was in some pain,” Buchanan continued.

“It was a brilliant result for the whole team and Emma was happy too.

“Nobody gave us a chance, but we have been brilliant since after Christmas.”

In his absence, reserve ‘keeper Craig Robinson was called up to first-team action and Buchanan was ‘delighted’ for the 18-year-old.

“I’m absolutely delighted for Craig as he has a superb attitude,” Buchanan stated.

“He arrived in the summer as a back-up, but I’ve learned a lot from him and he’s made me a better goalkeeper.

“His performance has laid down a challenge to me to get back into the team and that pushes me on.

“However I want to get into the team and I’ve just returned to training.

“I can’t complain if Craig keeps his place, but I want to play. We have big games ahead, not just in the Irish Cup, but in the Championship also.”

The Villagers find out their semi-final opponents on March 13, but Buchanan believes his team-mates can be confident against any of the remaining sides.

“We will take confidence from already beating Ards and Glenavon,” Buchanan concluded.

“I’ve played in an Irish Cup semi-final before for Newry City against Linfield and we were beaten, so why not seek some revenge?

“Whatever tie we get, we know we will be the underdogs, but anything can happen on the day.

“It has already been a magnificent journey for the whole club.

“Dean Smith has been brilliant since he’s arrived and is an up and coming manager. He will come up with a game plan for the semi-final and it’s up to us to carry that out.”