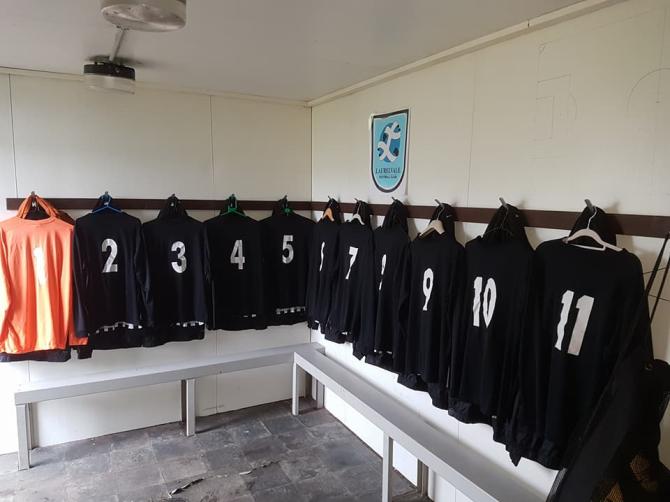 An end of an era for Laurelvale FC as construction begins on their new changing rooms. SG1142. Picture courtesy of Laurelvale FC Facebook page.

LAURELVALE had to come from a goal down twice at the weekend to earn a hard fought draw with a strong Craigavon City side at Vale Park.

The poor weather conditions didn't prevent either team from playing out a highly contested and competitive match. City took the lead midway through the first half with Aaron Black equalising for the home team with an assured finish just before half time.

City again went ahead 10 minutes into the second half. Laurelvale responded well after going behind with both teams having chances to add to the score. As the match entered the last quarter, Craigavon City were reduced to 10 men when their player was dismissed after his second yellow card.

Laurelvale were rewarded for their persistent pressure with Aaron Black again equalising with 10 minutes remaining. That was Black’s 6th goal in 5 league games after signing from Seagoe during the winter transfer window and is already proving a great addition to the this Laurelvale outfit.

With only seconds remaining, Laurelvale thought they had won the contest when Black again scored but the referee ruled out the goal for offside. Laurelvale remain 8 points clear at the top of Intermediate League B after second place Bourneview were held to a draw with Markethill Swifts.

The fixture also marked the end of a 26 year chapter for Laurelvale FC. After a lot of great work by the committee along with great help from local councillor Paul Berry, the fixture against Craigavon City was the final game played from Laurelvale’s existing changing rooms.

Whilst there have been some great times and a lot of friendships made they are definitely past their sell by date and the club look forward to accepting their new facilities.