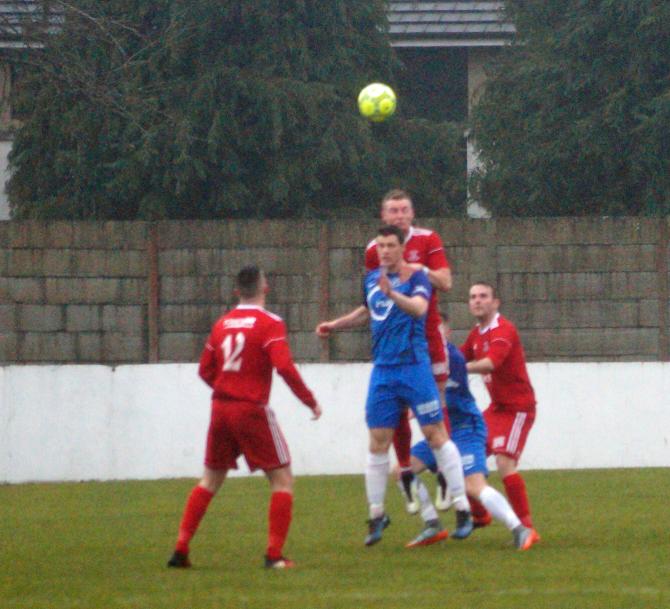 BALLYCLARE  Comrades secured a hard-fought victory over Loughgall at a damp Dixon Park.

For this match, manager Clifford Adams changed the team’s formation, switching to a three-man defence. Into the side came defender Michael McQuitty, whilst Stewart Nixon also came back into the starting line-up. Thomas Robinson was unavailable.

The early stages of the match were evenly balanced, with neither goal really threatened. The first effort of note didn’t come until the 19th minute, when Dallas fired a free-kick for the visitors from just outside the left side of the box, which flew narrowly wide of the far post.

A minute later, Comrades had their first chance, when a Chris Middleton cross found the head of Mark Kelly 8 yards out, but his effort went just over the bar.

Play became rather scrappy, with neither side finding any rhythm. However, the deadlock was broken in the 38th minute.

Stewart did well to get the ball low into the box from the left and it broke to Gary Brown 9 yards from goal. His resulting effort looked to be heading wide, until it deflected off the leg of defender Stewart and into the net.

Straight from the restart Loughgall were level with a bizarre goal redeeming Stewart. The Loughgall man took a punt from distance, the ball driven by the wind, taking a massive bounce of the surface. This deceived Alan Blayney and the ball flew over the despairing ‘keeper’s leap and into the net.

The second half began with an early attack from the home side, which saw a corner won. From this the ball was only cleared out to Chris Rodgers, whose shot from the edge of the box was deflected just wide.

In the 55th minute, the visitors had a good chance to take the lead, when a cross from the left found Liggett unmarked in the box, but his header from 8 yards out went wide of the target.

Comrades hit the front in the 65th minute. A corner saw the ball find its way to the back-post area, where Mark Kelly got to it, with his back to goal and closely marked inside the 6-yards box. Somehow, he managed to turn and get in an effort, squeezing the ball in from an angle 4 yards out.

The home side now had their tails up and had good chances to add to their lead.

In the 71st minute, Mark Kelly did well on the right, cutting inside before playing the ball across the box to substitute Francis Dugan in space. The young striker looked set to score, but he struck his effort from 7 yards wide of the target.

Then, on 78 minutes, the ball broke through to Gary Brown, setting him to run down the , one on one with the ‘keeper, but Robinson did well to come out and make a save, as Brown tried to place the ball past him from 14 yards.

Two minutes later, Brown cut inside the box and curled an effort just wide of the far post from 16 yards, with the ‘keeper well beaten.

Despite the narrow nature of their lead, Comrades looked comfortable with it, keeping the Loughgall attack at bay and looking the more likely to score again right up to the final whistle.

The home side might have got another goal deep into injury time, but for a wonderful save from Robinson. Stewart Nixon hit a rasping shot from an angle 8 yards out, which looked destined for the roof of the net, only to be turned over by the ‘keeper’s fingertips.