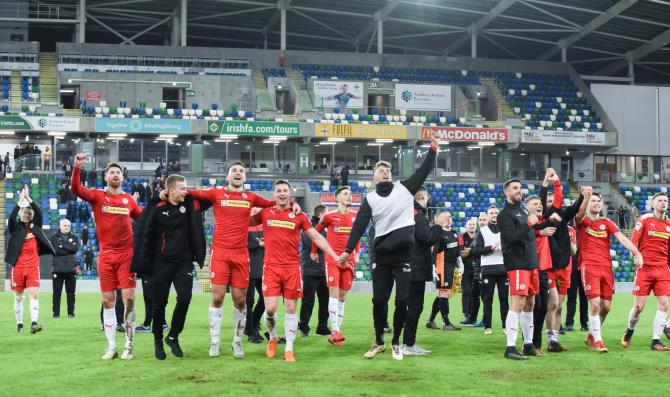 LOUGHGALL  have been drawn against Cliftonville in the semi-final of the Tennent’s Irish Cup.

The Villagers will take on their Premiership opposition at The Oval on Saturday 31st March (KO 3pm).

Cliftonville defeated Linfield in the quarter-final last Tuesday night and are currently 5th in the Danske Bank Premiership.

Loughgall manager Dean Smith conceded that his side will be underdogs for the fixture, but is targeting another cup upset.

“No matter who we got in the draw it was going to be a difficult game,” Smith said.

“All four teams are there on merit and we are delighted to be amongst that.

“We know that Cliftonville are a good team with a good manager and have strong firepower in attacking areas.

“If we are to make the final we need to be at the top of our game and hope Cliftonville have an off day.

“Player for player they arguably have the best squad in the Irish League, but they are only human beings.”

Smith admits he is looking forward to the occasion which will mark Loughgall’s first Irish Cup semi-final since 1997.

“It will be a great day out for everyone involved with Loughgall Football Club,” Smith added.

“We are not stupid and we realise we need to be smart and box clever.

“It will be tough mentally and physically but we have already beaten top flight sides to get here.”

Smith insists his players will give their all and hopes to be fitted for a new suit if they can reach the showpiece final.

“We are 90 minutes from the final and a new suit,” Smith concluded.

“We will go there to give it our all and hopefully the sun will shine in our favour.

“It’s important we focus on league games coming up and then we will turn our focus on Cliftonville.”