Dallas dynasty could give Blues the edge in cup tie 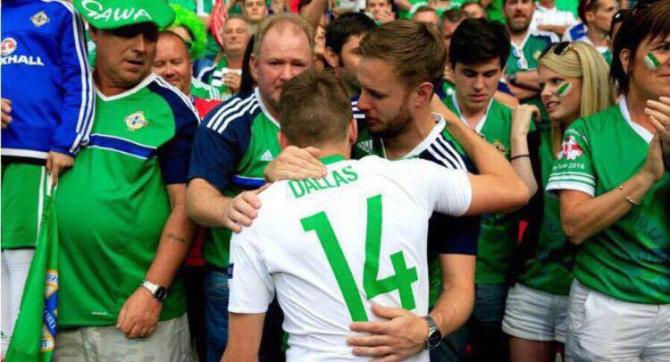 LOUGHGALL’s  Marcus Dallas admits he will speak to his brother Stuart ahead of this weekend’s Irish Cup tie against Cliftonville.

The 28-year-old has played a major role in the Villagers’ quest for Irish Cup glory, but will call on his sibling’s advice ahead of the fixture against Barry Gray’s men at The Oval.

Stuart is currently with Leeds United and represented Northern Ireland at Euro 2016, but keeps an eye on the local game and is in regular contact with Marcus.

“Stuart always texts me before and after a game to see how we’ve done,” Marcus said.

“He told me before we played Glenavon that I was to go out and enjoy it and make sure that I expressed myself.

“Despite Stuart being my younger brother it is always nice to hear from the professional and he takes an interest in how we’re doing.

“I will definitely speak to him this week and use what he has to say as guidance.

“It is great that he takes time to check on how I’m doing as he has a busy schedule.”

The Coagh man admits he is looking forward to the fixture as Dean Smith’s side aim to knock out a third Premiership outfit.

“I am excited and can’t wait for the fixture to be played,” Marcus added.

“To play a Premiership side is good at any stage of the season, but the semi-final makes it that little bit sweeter.

“The whole club is buzzing and raring to go with flags and banners.

“Loughgall is a small club but they deserve to have a great day out and we are all looking forward to the game.

“I think we all thought the game would have been played at Mourneview Park, but The Oval is a decent surface and there will be a good crowd there.

“It is a semi-final of a major competition, so we have to get on with the job at hand.”

Loughgall have already eliminated Ards and Glenavon to reach this stage of the competition and Dallas insists the squad will take confidence from those two victories.

“It was a tough battle to get this far,” Marcus continued.

“The Ards game I thought we were brilliant and we took confidence from that win into the Glenavon fixture.

“We were excellent that day as well and were deserving winners.

“The only disappointment since that win is that we haven’t picked up three points in the league.

“Perhaps we might have one eye on the semi-final as players don’t want to be suspended or carry a knock.

“We will certainly take heart from previous rounds into Saturday’s clash.”

Dallas knows too well the strength of Cliftonville’s ranks but hopes they can cause another upset and reach the Cup final in May.

“Cliftonville are the best team in the country on their day,” Dallas continued.

“They have just beaten Crusaders quite comfortably twice in the past few months.

“It will be really tough but you just never know.

“I never thought I’d play in a game of this magnitude, so it will be a great occasion.

“I just hope we can go one stage further and I’m sure the Chairman would love to spend some money on new suits.”