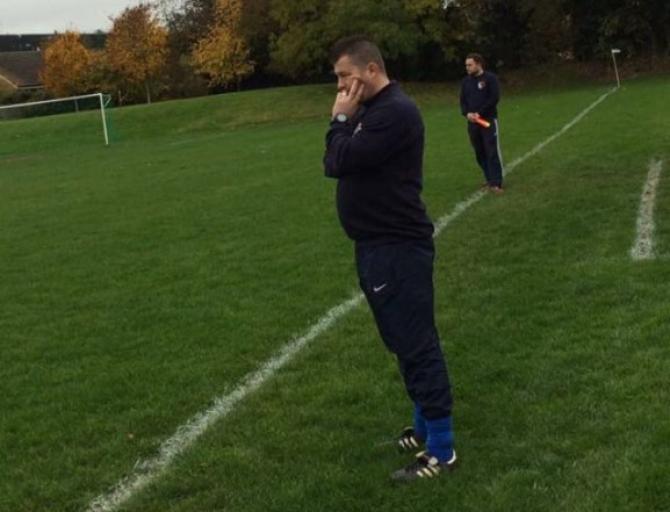 Jonny Mulligan will be stepping down as Armagh Blues manager at the end of the season. He will be replaced by Nigel Cooke.

NIGEL  Cooke has been named as the new manager of Armagh Blues Football Club for the 2018/19 season.
Cooke is no stranger to Mid-Ulster football after being the chairman at Armagh City for numerous years, before being involved with the youth set-up at Holm Park.

In a short statement on Facebook, the Blues want Cooke to move the club in the ‘right direction’ under his leadership and believes he is the ideal manager to take them to the next level.

Cooke will be replacing the outgoing Jonny Mulligan who will be stepping down from his role that he served for the last two seasons.

The club were quick to praise Mulligan for overseeing some of the ‘best results in the club’s history’, before confirming that he will be on the club committee from next season.

Speaking to the Ulster Gazette after the news of his forthcoming departure, Mulligan cites ‘life circumstances’ for the reason he will be absent from the dug out.

“My wife is due to give birth in three weeks so my commitment to make training and matches will be too strained,” Mulligan said.

“I will be sad to leave at the end of the season because we have assembled a good side and I believe we are two or three players short from being at the very top.

“I was originally brought in just to stabilise things, but I got well known players in Mid-Ulster and we managed to improve.

“The progress has been good and we are no longer known as Armagh Lose, instead of Blues!

“I would like to thank the Chairman, Darren Crowe, for sticking by me and giving me the opportunity to manage the club.”

Mulligan believes Cooke will have a fantastic squad at his disposal and hopes the Blues will be able to lift their first trophy.

“I firmly believe the club is on the cusp of doing something good,” Mulligan added.

“Nigel is well known to the club and Mid-Ulster football, so we are delighted to welcome him on board.

“He is a football man, was a scout for Crewe Alexandra and has been a manager before.

“We felt it was important that we appointed someone from the Armagh area and Nigel certainly ticks all the boxes.”

“I’m moving into the committee to give Darren a hand as he more or less does all the work and he needs some relief.

“The aim for this club is to win a trophy or gain promotion. It is great walking through Armagh and people are stopping to ask us how things are going.

“Long may that continue.”

Meanwhile, Armagh Blues got back into league action when they welcomed Glenavy Youth to the Millfield.

Both teams started the game well but neither was able to create a clear opportunity in the early exchanges. It was apparent that the visitors had come to play football and they put together several good passages of play in the first twenty minutes.

The hosts fell a goal behind when a cross from the Glenavy left panicked the Blue backline and Calvin unfortunately turned the ball into his own net, but to the hosts credit they were level within two minutes a miscommunication from a Glenavy throw in allowed Johnston to force a mistake from the visiting custodian and he duly tapped into an open net.

The Blues fell behind again with five minutes to the interval when they got caught on the break with men over Glenavy made Armagh pay and restored their advantage.

To the credit of the Millfield men they reacted in the best possible fashion fine football through midfield allowed skipper Dobbs to thread through Sturgeon who's delivery was met by Johnston who levelled proceedings on the stroke of half time.

The second half got underway and the Blues looked much sharper they were moving the ball faster than in the first half, Dobbs and Cooke were getting in the ball at every opportunity and their probing passes were starting to force a great deal of pressure on the visiting defence.

Excellent link up play between Ross and Dodds forced a corner kick and from Dobbs delivery Cooke’s thumping header was turned in on the line by tricky winger Sturgeon to put the Armagh side ahead for the first time.

The local lads were playing well in fairness but Glenavy were keeping them honest Maguire and Breakey had to be alert on a few occasions to snuff out any visiting threat. With fifteen minutes remaining a forceful run from Ross down the right was rewarded when his driven cross was met with a bullet header from Nicholl in truth no goalkeeper would have got near it.

Just as it looked like the hosts were safe the referee awarded their guests a penalty kick which Runette was unlucky not to save at four, three the last five minutes were going to be tense but it was to be the cathedral city blues who collected the three points. All eyes now switch to Wednesday nights fixture with United LT at the Millfield.