It's Oval and out for Loughgall's cup dreams 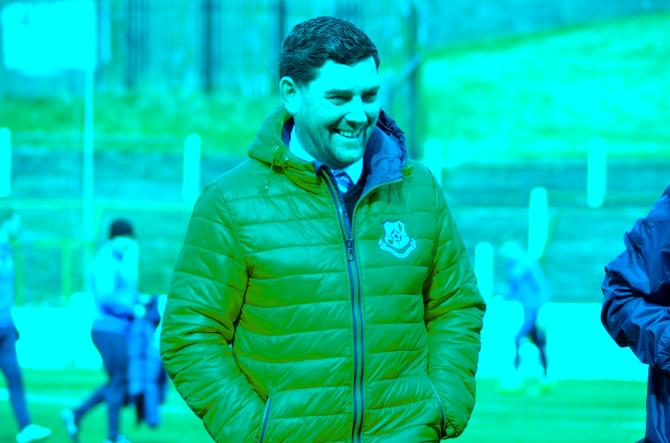 Dean Smith was all smiles as he managed Loughgall to their first Irish Cup semi-final since 1997.

LOUGHGALL  manager Dean Smith admits his side were the ‘architects of their own downfall’ as they fell to a 4-1 defeat in the semi-final of the Irish Cup.

The Villagers fell behind after just 21 seconds to a Joe Gormley effort and conceded four goals inside the opening 45 minutes.

It was a harsh lesson for the Lakeview Park side as dreams of a first Irish Cup final appearance were dashed by their Premiership opponents.

“It’s a weird one because Cliftonville had five really good chances and took four of them,” Smith said.

“All the goals were avoidable from our poinr of view, but that’s why Cliftonville are one of the top teams in the country. They have players all over the pitch who will punish any mistakes.

“The first 15 minutes we were the architects of our downfall, but hopefully we will learn from that.

“I was hoping once Andy Hoey made it 3-1 that we would get the players in at half-time and fix the shape and maybe get another goal after the break. However we conceded another poor goal straight after and didn’t take full advantage of the lifeline.

“I thought in the second-half we bossed the game in terms of football, but you could possibly argue that Cliftonville took their foot off the pedal.”

Loughgall finished the game with 10 men after the dismissal of Peter Campbell and the manager had sympathy for the midfielder.

“If the referee had of waited two or three seconds he could have given an advantage and we would have been clean through on goal,” Smith added.

“This also meant he would have stopped giving out two yellow cards and we would have had a great chance to score.

“Peter’s frustration boiled over from that and whilst I’m not happy he will be suspended, you can understand why he was giving off.”

The Villagers brought a healthy crowd to The Oval and Smith was full of appreciation for the support his side were given throughout and after the contest.

“The support was tremendous before, during and after the game,” Smith continued.

“We had an enjoyable night at the club and it was a great day out for everyone involved with the club.

“Supporters came from all across the UK to attend the game and we appreciate it.

“As I said after the game, there isn’t much point in this being a one-off, we should strive to replicate this.

“If someone said at the start of the season that we would finish in the top six and reach the semi-final of the Irish Cup, I’d have biten your arm off for that.

“The only frustration is that we couldn’t have kept it tight like the Coleraine – Larne game.”

“Newry are on the crest of a wave after beating Institute,” Smith stated

“They will certainly have eyes on securing promotion, so we know what to expect.

“The last game between us was an entertaining draw and they are usually tight games.

“We are back to our bread and butter and we want to pick up more league points.

“We will be without Peter Campbell through suspension and we think Josh Finlay’s hamstring injury will rule him out for the rest of the season.”