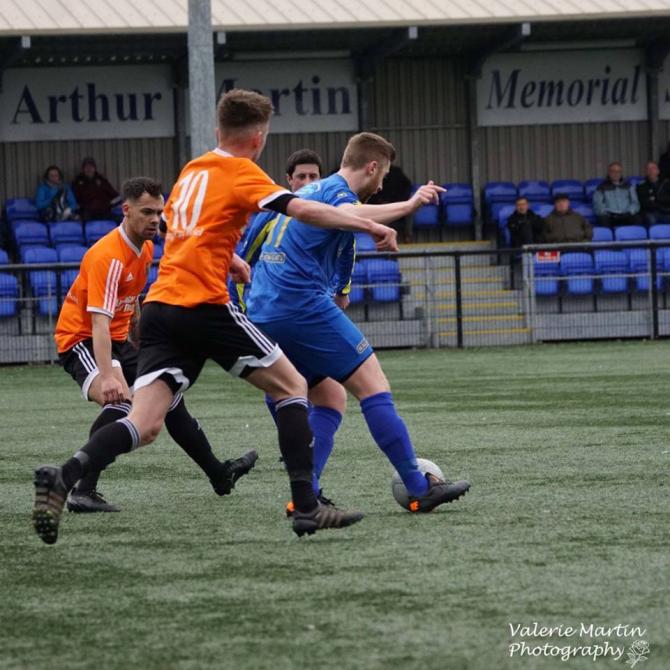 ARMAGH  City made the trip to Mill Meadow for their Saturday afternoon game in the Bluefin Sport Premier Intermediate League. The match began with a very fast pace with both teams playing end to end football. Moyola would have the better of the possession however, Armagh’s speed was a constant threat on the counter. This showed in the 7th minute when City’s Andy Wilson cut in and drove the ball into the bottom left of Moyola’s goal. 0-1 to Armagh.

Moyola responded well with Jason Paul finding himself one on one with the Armagh keeper in the 16th minute, only for a confident save to prevent an equaliser. Moyola were playing much better football and getting chances from it with Oran McAuley having his shot blocked from in the box. McAuley would get another chance soon after in the 30th minute when he turned into a half volley, forcing a very good save from the Armagh keeper. These missed chances would soon be regretted when in the 31st minute Jack Clarke had a shot deflected off of Aaron Harris and into the back of Moyola’s net, doubling Armagh's lead to 0-2. Moyola’s continued fight until the break would prove crucial however, as McAuley was tripped in the Armagh box in the 34th minute giving Moyola a penalty. Jason Paul was able to calmly slot this away to bring one back for Moyola making it 1-2 at halftime.

The second half began with some back and forth between the two teams as neither took control early. Moyola looked the more threatening as they would find their first chance of the half in the 56th minute. A long ball was met by Jason Paul who beat the keeper and added his second to put Moyola level. Armagh’s response was immediate as Maciulaitis stabbed in a chipped shot to return the lead to Armagh 2-3, Moyola looked severely deflated and frustrated. The frustration of Moyola would be shown when in the 58th minute Nicky Hudson responded to Armagh's goal with a foul that gave him his second yellow, sending him off. Armagh would then nearly add a fourth when they had a free kick tipped onto the crossbar by Hegan in an excellent save.

Armagh would begin to be much more conservative in order to protect their lead, allowing Moyola to apply pressure. This would favour Armagh however, as they would continue to counter nearly adding a fourth in the 65th minute when a low shot went just wide. Moyola made their first change in the 66th minute when Benji Agnew came off for Tomas McCann who would look to add an attacking threat despite being a man down. Another chance fell for Armagh in the 67th minute when they hit a volley from point blank range, forcing an incredible save from Hegan.

Moyola did make some good chances as Peter McClure would find the ball at the back post after a corner, volleying over. Moyola would make two more changes, first bring Stephen Greer on, who was looking to build on a good appearance in their last game, for Craig McAllister. Moyola then brought Joshua Evans on for Jason Paul as they chased an equaliser. They nearly had their equaliser in the 87th minute when McCann struck a half volley narrowly wide. He would follow this a minute later with a shot that would go straight into the Armagh keepers arms.

The rest of the match would be closed out by Armagh, working hard to keep possession and earn the victory. Full time 3-2 to Armagh, a morale boosting win for the Eagles as they move up to 7th spot in the Bluefin Sport Intermediate table.