Nowhere else I’d rather be 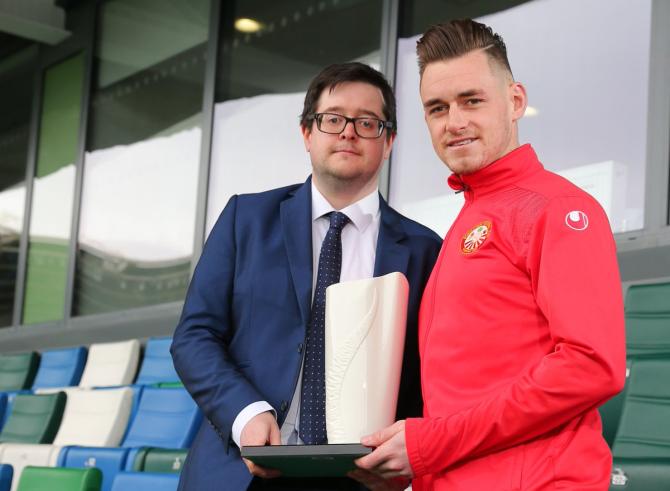 Chris Lavery has been named as the Bet McLean Championship player of the Month for March. He was presented the award by NIFWA Chair Keith Bailie.

PORTADOWN  winger Chris Lavery has been named as the Northern Ireland Football Writers’ Player of the Month for March.
The 27-year-old was in fine form after netting goals against Institute and Loughgall, as well as providing assists against Newry City and Banbridge.

Lavery admits he was ‘shocked’ to receive the award, but credited the success to his team-mates and management staff at Shamrock Park.

“It was a bit of a shock when I was phoned to say that I had received the award,” Lavery said.

“Obviously I’m delighted as it’s been a great month for the club and me personally.

“Since Matthew Tipton and the management staff have arrived, the club has been buzzing and our attacking style of play suits my game.

“My form at the start of the season was a bit hit and miss, but thankfully I’ve been more consistent in recent weeks.

“The main thing is that we are winning games, but on a personal note, it is great to be providing goals and assists.”

Since Tipton took the reins last month, the Ports have drawn one and won four of their last five matches in the Bluefin Sport Championship.

However despite having one eye on securing a play-off, Lavery knows they will need H&W Welders to have a dip in form.

“Our first game under Tippy was against Institute and it’s fair to say we were all nervy and it took us a bit of time to find our feet,” Lavery added.

“Since then, everything has seemed to work. The formation, style of play and tactics has been spot on.

“We are creating chances, scoring goals and good to watch. We have been winning games 2 or 3-1, but in reality, we should be scoring more!

“Our recent form could be arriving a little too late. When Tippy took charge there was no pressure on us as promotion seemed beyond us.

“However we have been on good form and there is pressure on us now to win our last two split games.

“The Welders are three points behind us, but they have three games in hand, so we need a bit of a miracle.

“If we get a play-off that would be great, if not, we will go again next season.”

The Lurgan man has enjoyed top flight experience with Glenavon, Dungannon Swifts and Glentoran and has aspirations to test himself at that level again.

“After relegation last season, our main aim was promotion either through winning the league or play-off,” Lavery continued.

“We know that Portadown shouldn’t be in this division as they are a huge club, but it is a difficult league to get promotion from.

“I think we might have been too casual at the start of the season and we have been caught by surprise.

“I relished playing in the top flight and it would be great if I can repeat that at Portadown.”

Lavery committed himself to the club last month after agreeing a new two-year contract extension.

The likeable winger insists the decision was a ‘no brainer’ as he is enjoying his football at Shamrock Park.

“I’m loving my time at Portadown because I’ve been a first team regular all season,” Lavery concluded.

“There is nowhere else I’d rather be and playing under Tippy has been a pleasure.

“It was a no brainer to stay and I didn’t have to think long about it.

“I’m just hopeful that we can win our last two games and the Welders have a wobble.”