‘Peter would be proud’ 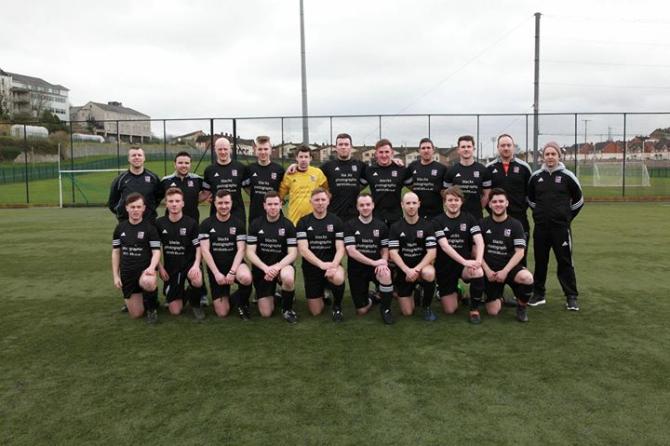 Lurgyvallen Twelve have recently tasted success in the Lonsdale One Division, winning the title undefeated.

LURGYVALLEN Twelve are taking the local football scene by storm after romping to the Lonsdale One title last week.

The Armagh outfit were also undefeated last season in which they earned promotion as well as winning three cups.

Stevie Corvan, who plays left-back for the club and is a committee member, insists Lurgyvallen have become obsessed with winning.

“Our form the last two seasons has been brilliant,” Stevie said.

“Especially last year as we didn’t drop a single point in the league and won the Andrew Gass Cup, the Reverend David Sommerville Cup and the Reds Neds Cup.

“We knew this year would be more difficult as we are playing tougher teams, but winning is a habit and we have been on a roll.

“We always knew we could compete at a higher level, but even this year has taken us by surprise.”

It marks a rapid success for the club which was founded in 2012 after the death of Stevie’s friend, Peter McAneney who was a keen footballer for Milford Swifts.

“We are over the moon with our success as it’s been over a short amount of time,” Stevie added.

“The same core of players have remained throughout, but we have also added some good talent.

“With the management setup here and our successes, we are in the fortunate position in that players want to sign for us.

“Me and Peter always joked about setting up a team as he loved his football and was the captain of Milford Swifts.
Unfortunately Peter passed away after complications following a routine operation.

“After his death, we all wanted to do something to keep him in our memory and we decided to form a football club and run it the way he would have wanted.

“The name of the club is very special because Lurgyvallen is a town land close to where we play our games, and Twelve – as we believe Peter is our Twelfth man when we are on the pitch.

“We don’t have a number 7 jersey as that was Peter’s number at his club and on our badge we have a star where you can see the number 7 inside it.

“When you score goals in added time, you definitely feel like Peter is looking down on us.”

Stevie also explained the running of the club hasn’t been easy in the last six years but has credited others for helping Lurgyvallen become a force in junior football.

“We were like amateurs at the start, but a few of the older players in the squad helped us along the way.

“Peter’s family are also involved and they help to present the Players’ Player of the Year award at the end of the season.”

With Lurgyvallen’s season now over, Stevie insists that the club will explore all options as to what league they will be playing in next season.

“We will talk to the management and make the next decision from there,” Stevie concluded.

“We want to grow and keep on getting better.

“A few teams and people are noticing how we’re doing and that’s great.

“We definitely know that Peter would be proud of everything we had achieved.”