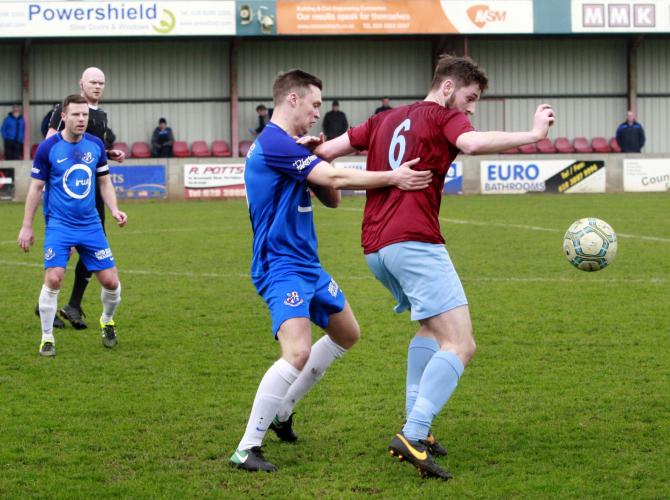 INSTITUTE  extended their advantage at the summit of the Bluefin Sport Championship to four points with a comfortable victory away to Loughgall.

‘Stute took the lead on the half hour mark through Michael McCrudden’s header, before Niall Grace struck twice in the second-half to seal all three poinrs for the visitors. Loughgall managed to score a consolation goal late on, but Paddy McLaughlin’s Institute side are now on the cusp of promotion.

After an even opening half-hour, Institute began to take control and they opened the scoring on 33 minutes through Michael McCrudden’s headed effort. Eamonn Seydak squared the ball, inside the penalty area, for Niall Grace who hit the bar with a close-range header and McCrudden was on hand to head home the rebound.

Buchanan misjudged the flight of a cross and his weak punch fell kindly to Grace who finished from close range.

Grace grabbed his second goal with a superb effort from outside the penalty area, that curled low into the bottom corner out of the reach of Buchanan.

Loughgall striker Gary Liggett netted a late consolation goal in injury time when he did excellently to cut inside and fire home a left-footed shot inside the penalty area.

Speaking after the game, Villagers boss Dean Smith admits he was dissatisfied with his side’s performance as they slumped to a third defeat in a row.

”Losing any game is hard to take but it’s fair to say that Institute have more to play for than us,” Smith said.

”They are a good side and took their chances well, but the goals could have been avoidable.

”In our next two games, I’d like us to be better defensively as it’s been an Achilles’ heel for us.

”We tried out a few things on Saturday and gave chances to a few players to see how they’d react.

”Unfortunately we were beaten by the better team on the day.”

Incidentally, Loughgall face the same opposition next weekend away from home and Smith hopes his side can help derail Stute’s push for promotion.

“Institute have been great this year and deserve the plaudits, but I want to pick up as many points before the end of the season,” added Smith.

“We will train hard this week and prepare the players as we usually do.

“We have two games left and we will be targeting six points.”