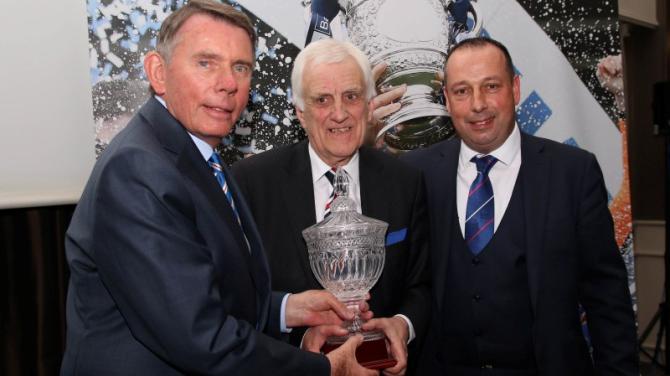 TANDRAGEE  journalist  Billy Kennedy, who has stood down after a record 45 years as a Linfield Football Club Director/Board member, has been recognised by the Club for his sterling work in that role.

Bessbrook man Billy, first elected to the Linfield Board in 1973,  was Blues' Vice-Chairman for nine years until 2017 and has been an influential figure at Windsor Park for most of five decades, representing Linfield at Irish League and Co Antrim FA levels. He has also been the Linfield programme editor for 49 years.

At the Linfield annual dinner on Saturday night, President Peter Lunn and Chairman Roy McGivern both paid tribute  to Billy's service as a club legislator, the longest serving in the Blues' 132-year history, recognising this with the Club's annual Merit award and designated as Linfield Honorary Vice-President. It has been an honour and privilege to serve as a Director and Board member at the biggest, most successful football club in Ireland. My interests in Linfield will continue " said lifelong supporter Billy.