Markethill Swifts end their season on a high 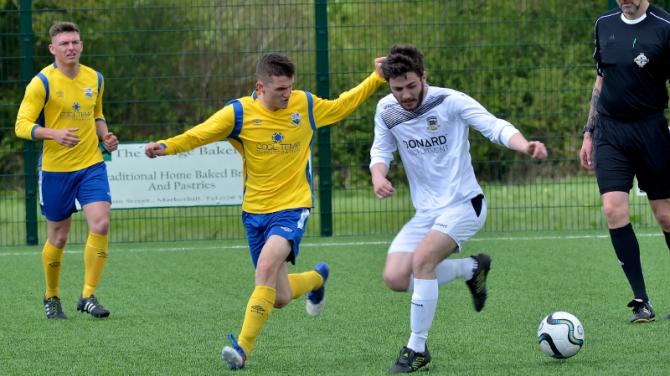 MARKETHILL  Swifts' long journey away to Broomhedge Maghaberry on Saturday yielded a comfortable victory, ending the season on a high.

With a dry pitch at Anvil Park and warm conditions making it difficult for the players, both teams edged themselves into the game and, in a half of few chances, the first opportunity fell to Markethill as Simon Andrews fired wide from a free kick after the Broomhedge keeper had handled outside of the area.

Markethill did not have to wait long for their next chance and they opened the scoring with Neil Shaw running behind the Broomhedge defence and floating a ball to the back post for Kyle Irwin to nod in from a couple of yards out.

Broomhedge almost replied immediately but a tight offside call when through on goal prevented them from equalising.

The second half started much like the first with Markethill controlling the majority of the play and Broomhedge looking to hit on the counter attack.

A series of corners proved to be the best opportunity for the home side to get back into the match but the Markethill defence was not troubled greatly. Markethill extended their lead from the penalty spot midway through the second half with Robert Hutchison being upended in the box after a fine dribbling run and he duly stepped up to fire low under the keeper's despairing dive.

After a raft of changes slowed the game down and with players understandably tiring in the heat, oncoming Ben Dougan took advantage to lash the ball across the keeper and into the bottom corner to put the game out of Broomhedge's reach.

Markethill ended the season with a seventh-place finish in a very competitive league and with a young squad having more time to gel, all eyes will be on them to mount a sustained promotion push next season.