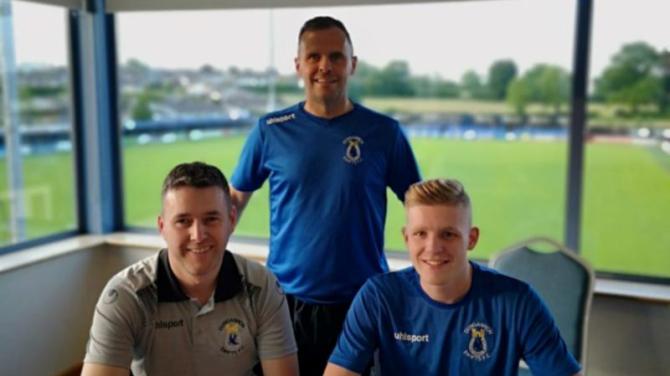 Rodney McAree has responded to Ryan Mayse’s departure by bringing in the 22-year-old box-to-box midfielder.

McMullan had previously played for Limavady United and Ballyclare Comrades before catching the eye of the East Belfast club last summer.

Commenting on his move to Stangmore Park, McMulllan stated the manager had a huge influence over his decision.

“A massive part of my decision for Dungannon Swifts was definitely Rodney, as he takes a lot of the sessions and I like the way he sets the team up and always admired the way Dungannon Swifts play.

“Playing against them they’re a good team to get the ball down and it’s a team that I can only see going one way.”

The Northern Ireland Youth International decided it was time for a new challenge away from The Oval after experiencing limited game time last season.

McMullan joins Mark McAllister in enhancing the Swifts’ attacking options, describing himself as a midfielder who likes to play higher up the field.

“This season, I would like to get playing regularly again. I feel I need to be playing to develop at this age and under Rodney I think I will do that. Also, I would like to start getting a few goals in the league this year as I didn’t manage to get too many last year.”

He added: “Dungannon won the Bet McLean League Cup last year and Rodney spoke to me about progressing on that – pushing up the league and obviously more silverware. As I said, it’s a team only going one way and Rodney signing a new contract is massive for the progression of the Club and I’m delighted to be here!”

The manager echoed the delight over the addition..

“Corey is someone we had our eye on the year before last when he was playing for Ballyclare Comrades, he was a player who was very energetic, that got into the box very well, and scored goals from midfield but unfortunately Glentoran got in ahead of us before we even got the chance to speak to him so we have had to wait until now to get our man.

“Technically he is a very good player and he adds a lot of energy.

“He gives us something different to the other midfielders we have in our squad and it certainly gives us another quality option.

“I’m very happy with the signing and I look forward to working with Corey.”