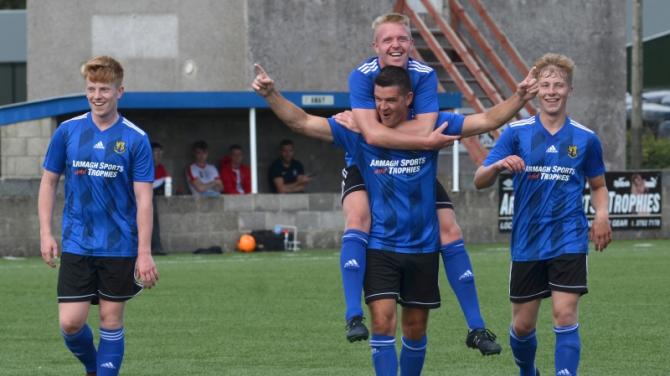 FOUR goals by Conor Mullen – two either side of half-time – plus one apiece for Ryan Corrigan, and substitutes Neil Kerr and player-manager Shea Campbell saw Armagh City breeze into round two of the Tennent’s Irish Cup and send Bangor back to their North Down home to lick their sores.

With the Newtownards-based outfit having come to County Armagh weighed down by the burden of defeats in each of their first three Northern Amateur League (Premier) matches of the new season - 3-1 at Islandmagee, 3-0 at home to East Belfast and 5-3 away to Crumlin Star – self-belief among the John Johnston-coached guests cannot have been anything other than rock-bottom.

‘Sure and Steadfast’ is the motto of the Boys’ Brigade from which 1st Bangor Old Boys sprang, but played three, lost three, goals for 4, against 11, points 0 is not a record suggestive of a team that was either sure of steadfast defensively. Nor will it have inspired much confidence.

That said, the locals had been hit for six the previous weekend when they hosted H&W Welders in the League Cup, so having been hammered 6-0 they were hardly brimming over with self-confidence, either.

So, two teams in need of a morale-boosting performance and, more importantly, a win. Which of them had the greater hunger - and the ability to see their appetite satisfied?

The early signs suggested it was the hosts who were the more likely. With a strong wind in their backs, they took the game to the visitors from the off.

Bangor looked incapable of dealing with the problems posed by the conditions and the home players. With a mere 11 minutes on the clock they found themselves a goal in arrears with Corrigan having added the finish to a move he had initiated - 1-0

While Armagh’s play at moments was first-class, Bangor added to their own problems via some tactically naïve – and at times downright appalling - defending, A case in point came shortly after Corrigan’s opener when two horrendous howlers enabled Mullen to go close to doubling the lead, following which a left-footed effort from Andy Wilson flew just wide when he cut inside his supposed marker.

The part being played by the wind was glaringly obvious, with home ‘keeper Danny Devine’s out-of-hands kicks landing the ball just short of the opposition box, while his opposite number was struggling to make half-way. And even on the rare occasions on which Bangor threatened briefly, their efforts came to nothing, witness a tame shot by Oluwtaniwa Henk Radun following a good run and pass from Chris Curran-Cochrane.

City were less profligate, for seconds after striking the inside of a post with a well-struck shot, Mullen headed home a cross, thereby punishing a further example of abject marking by the guests. And 2-0 became 3-0 when Bangor again conceded possession cheaply. Two passes later, Mullen had the ball was in their net again.

As the screw tightened, so Bangor’s desperation increased. So, too, did the rashness of some of their tackles. And just before half-time, central defender Sam Wallace was dismissed after conceding one bad tackle too many. Referee Rowan Vernon immediately produced a red card and the seasiders, already three goals in arrears, found themselves a man short, too. Even with wind advantage to come, that was way too high a mountain to climb.

During the interval, the Armagh manager withdrew skipper Paddy Judge, replacing him with Luke Ferguson. And having decided to give Shay Gerathey a breather after the first 45 minutes, it was Campbell himself who deputised. Those switches meant changing the format, but the re-shaped line-up took that in their stride.

Campbell may be 38 now, but he remains capable of flashes of class, as well as having vision superior to that of most at this level. Some of his first-time passes were masterful and his ability to find space against the fast-tiring 10 men meant he stood out by the metaphorical mile.

Neil Kerr for Kyle Lobo was the last of the switches and the quality of Campbell’s changes was vindicated when he and Kerr scored the locals’ fifth nd seventh goals.

But it was Mullen who bagged numbers four and six, with the first of those completing his hat-trick and earning him a match-ball. The tally could –should – have been greater, however, for Mullen missed as many as he scored on a day when Bangor were simply blown away.

Kerr’s goal was beautifully created and finished and Sean Mallon’s set-up for Mullen’s fourth and City’s sixth was a work of art. Indeed, Mallon excelled in the second half, as did Wilson at times.

Campbell fluffed an opportunity from a Wilson cross and then, a minute later, laid on a gilt-edged chance which Mullen somehow conspired to squander.

But the player-manager ensured his and his club’s day ended on a high when he pounced on a loose ball after Bangor ‘keeper Chris Carson looked to have brought down Mullen. Before referee Vernon was able to make any penalty decision, Campbell showed his goalscorer’s instinct – 7-0.

Quite a response, then, to the previous week’s hiding by the Welders, and one which gave the new manager a lot of satisfaction.

Speaking straight after the final whistle he told the Gazette, “That was much better. We set out looking for a response after last week and think, from the first whistle, we got it.

“It was a good team performance, with everybody working hard for each other. That’s what we’re about here – no individual stars, but a team. Today has been a performance by everybody; everybody contributed and that’s what I wanted to see.”

Asked what he was hoping for in round two he replied, “I’d like a junior team we can beat so were able to stay in the competition, But anything at home would do us at this stage – just keep winning, I suppose..”

As for his personal contribution in the second half, he smiled as he said, “It’s tough at this stage – a lot of hours, a lot of work, but I’m enjoying it.”