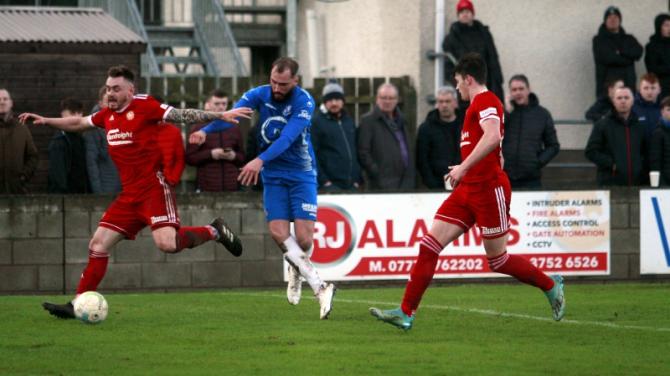 Thursday’s win means that the Ports have won each of their past two derby meetings with the Dean Smith-coached Villagers, thereby maintaining an unbeaten run in this season’s encounters, their first having been a scoreless draw, also in Loughgall.

Loughgall thought they had made the ideal start when, as early as the third minute, Nathaniel Ferris had the ball in the visitors’ net. His ‘goal’ was ruled out offside, however. Even so, it served to confirm that the Blues were up for this one.

That fact was underlined when, midway through a first half in which they had the better of things, they created a great opportunity for Peter Campbell at the back post, from where he had given his side against the Ports in their November clash at Shamrock Park. On this occasion, however, he failed to make the most of the chance.

And the same player then saw another effort deflected wide by the guests’ Ryan Carmichael.

The first half finished scoreless and after the resumption it was Portadown who began to look more imposing.

A fine George Tipton effort was well saved by home ’keeper Gareth Buchanan, but the Ports took heart from their steadily improving performance. Paul Finnegan and Lee Bonis in turn had chances, but both shot straight at Buchanan.

On 59 minutes, Loughgall’s ex-Portadown defender Fra Brennan headed a Stephen Teggart cross against his own post – a real let-off, but one which underlined the visitors’ increasing dominance.

So it came as no great surprise when Adam Salley finally found a way through after 62 minutes. Chris Lavery provided the cross from which Salley beat Buchanan with a back-post header.

Lavery and the ’keeper were then involved in two further incidents, with Buchanan twice denying his red-shirted opponent, followed by a Bonis attempt that went just the wrong side of the post from the visitors’ perspective.

Loughgall gave their all in the search for an equaliser with Dale Malone, Campbell and substitute Jamie Douglas in turn threatening.

In the dying stages, however, it was Bonis whose cool finish at the far end added an all-important second goal which ensured the Ports left with all three points. But while Bonis applied the coup de grace it’s Carmichael who gets the plaudits for his ‘assist’ in having teed his colleague up from a corner.

Although disappointed after what was his team’s third successive December defeat, Loughgall manager Smith still saw plenty over which to enthuse.

“As an occasion, it was a great advert for our club,” he said. “Big crowd, great atmosphere in what was a game of two halves. We were the better team in the first, but once again we didn’t take our chances.

“I don’t think there was a lot between the two teams, but Portadown were the more clinical. They maybe didn’t create as many chances as us, but the difference was that when they did, they put them away.

“But as I said, the ground was full, the atmosphere was brilliant and as an occasion it was great to be part of. Obviously I’m disappointed to have lost, but I can’t fault our players.

“They gave all the had and you can’t ask for more than that.”