Ferris and Campbell at the double! 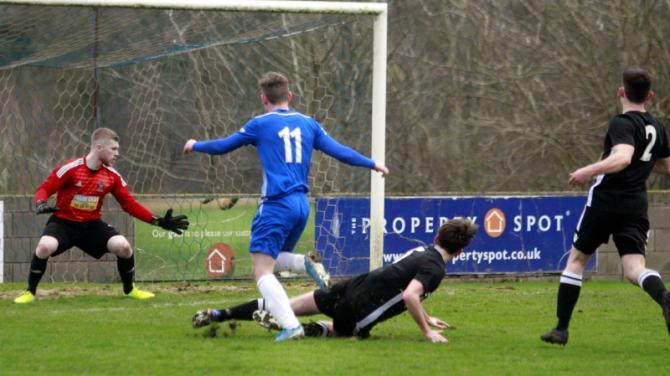 NATHANIEL Ferris and Peter Campbell bagged two goals apiece as Loughgall swept to a comfortable victory over bottom of the table Knockbreda at Lakeview Park on Saturday.

And that, coupled with Portadown’s 3-1 defeat by Dergview and Ballinamallard United’s draw with Ards, saw the Villagers close the gap on the pair above them.

Ferris opened the scoring on 24 minutes before strike partner Campbell followed up just after the half-hour.

Leading 2-0, despite the fact that they were not playing particularly well, Loughgall – who had won the Mid-Ulster Senior Cup final on Tuesday night – were on course for three points.

And in the second half they took complete control and might well have run up the proverbial cricket score. As it was, they had to content themselves with Ferris having made it 3-0 on 59 minutes and Campbell adding the fourth within 90 seconds.

’Breda, by that stage, were down and out, though in fairness to them they did rally in the final 15 minutes during which they played what was arguably their best football of the afternoon. From their perspective, however, it was much too little, way too late.

Loughgall manager Dean Smith revealed, “After Tuesday night it was one of those positions where you were almost trying to get the guys back down off the ceiling!

“Don’t get me wrong – I’m not criticising them for that. They’d every reason to be up after beating Glenavon and winning a senior cup, particularly as they fully deserved it. So I’m immensely proud of the players for that.

“But we had another match to play against opponents who were desperate for points, so it was about trying to re-focus.

“Okay, it wasn’t a great game. As football matches go, it was no fantastic spectacle. But I can live with that because what matters is that we did what we needed to do to win it.”

He was loud in his praise of each of his side’s two-goal heroes.

“I’m really pleased for Peter and Nathaniel that they got a couple of each. We scored a couple of gems,” he said.

He also hailed goalkeeper Finton Coney, saying, “He has done brilliantly. We’re unbeaten since he’s been playing and the fact that this one was a clean sheet is good for him and important for us as a team.

“’Keepers and defenders always enjoy not having conceded, and with us having scored four, that means everybody in the team is happy,” he noted.

His only post-match injury concern was Marcus Dallas, who now has yet another ankle problem. He was withdrawn before half-time.

“We won’t rush him back,” Smith said. “That’s the third time he has gone over on his ankle, so something isn’t right. Until we’re sure he has recovered completely, we won’t risk playing him. He certainly won’t be playing this weekend.

“He’s a fantastic player – fantastic passer of a football – so he gives us a lot. Now he isn’t available though, we’ll have to do without him. But that’s why we have the squad that we do; we have others who can come in and do a great job.”

While delighted at having seen his own team bank three more points, he was unwilling to read too much into Saturday’s slips by Championship leaders Portadown and second-placed Ballinamallard, as a result of which third-placed Loughgall made up some ground.

“I’ve said it before that we’re not too interested in what other teams do,” he insisted. “We just focus on ourselves.

“There’s another 12 or 13 games to go, so there’s going to be a few twists and turns. All we can do is try to keep winning our matches and see where that takes us.

“So long as we’re doing that, we’re not going to have too much time to spend looking at what other teams are doing.”

Not used: Delaney (not used).