Team target 10,000k goal for NHS after season is sidelined 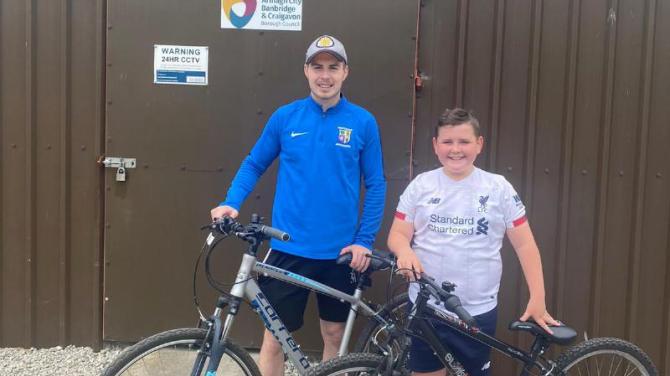 COVID-19 may have wiped out the football season for this year.

But a Portadown team are refusing to just sit on their hands and do nothing and have set themselves a different goal!

Bourneview Mill has summoned committeemembers, as well as past and present players, for a fantastic fundraiser to benefit key workers on the frontline at Craigavon Area Hospital.

The team – who play in Section A of the Mid-Ulster League – are currently completing a ‘10,000k in the Month of May’ challenge.

By walking, running or cycling, the idea is that they will collectively clock up the kilometres, with friends, family and supporters encouraged to go online and make a donation.

A Just Giving page has been set up and participants are grateful for all help as they try to hit their £10,000 target.

They want to raise as much as possible to ensure they can make a real difference to the staff at Craigavon at this difficult time.

Bourneview Mill Manager Mark Jackson is the man who came up with the idea – well, technically speaking, it was his wife!

He told the Ulster Gazette: “My wife teaches in Omagh so they talked about doing it and I sort of jumped on it and said ‘that would be good for the football club to do’.

“I thought it would be good for fitness because there’s no football or anything happening at the minute and it gives us the chance to raise money as well.

“We have 55 guys who are ex-players, committee members and players who are playing at the minute. You’re talking starting age at 17 and the oldest one would be about 70.

“We’ve got a wee WhatsApp group going so it’s a wee bit of competitiveness as well. People are putting up times and then everyone else is sort of trying to beat their time.”

As well as the money they are amassing themselves, a local bakery – GingerNut Cakes – is also ‘raisin’ that bit extra to help the cause!

Said Mark: “The bakery is beside us – it’s owned by one of the players’ wives. She’s been raffling cakes and then giving the money raised to the NHS charities that we’re doing it for.”

Although they have not hit where they want to be yet they are still hopeful of a late flurry.

And while they fully intend to complete the 10,000kms in May they are prepared to go to extra time to allow for late donations!

Said Mark: “We are over £3,000 at the minute so the money side isn’t going the way we wanted, because we’re into our third week now.

“We should have been up around the £7,000 mark. It’s unfortunate but we understand there’s a lot of money going out to different charities so we’re just going to do the best we can really.

“It is taking part during the month of May but then if there’s people want to make donations after we’ll still do that.”

The Mill manager is proud of the efforts and has been keeping tabs on progress.

“I take a total after every week,” he explained. “Last week we were sitting at a total of 6,000kms, so we’re over halfway and we’re pretty much on target.”

It has been a unique experience for all involved and has allowed for a bit of ‘inter-generational’ banter!

Added Mark: “It’s great. You have all the players and you’ve a couple of ex-members. There’s a guy who is used to running 40 or 50 miles a week, he used to play.

“And then there’s the young guys coming through and they’re like, ‘wow, I can’t believe these older guys run all these miles’.

“But the young guys are pushing hard as well. Once their legs start to get sore a bit they get on to the bikes and go out on them as well.

“A whole lot of players are out with their families, out cycling and walking and running.

“The ex-players are working really hard that way and then the young ones are chipping in.”

All involved are looking forward to presenting the proceeds and know it will be used to good effect.

“We want to go into Craigavon Area Hospital and we want to help different departments. It all depends on how much we raise,” said Mark.

“I have a cousin who works in the Emergency Department, so there will be some money going there and then we’ll go in and ask.

“We have a couple of doctors who play football for us so they are going to advise us too.”

This season will certainly not be one which will be forgotten in a hurry.

But this challenge has been a real encouragement and allowed some good to come during these uncertain times.

“It’s great bonding for the players and especially for the committee of the club and even the ex-players, to keep them interested and around the club, because it’s good to have the old players in and around the young ones,” added Mark.

“And the young ones are all working together, they are still connected through social media and stuff and then putting in their times through cycling and running.

“We have a brilliant bunch of lads. We have a real family-orientated club, so I thought let’s get on this.

“We wanted to do our bit and are glad to be able to do that.”