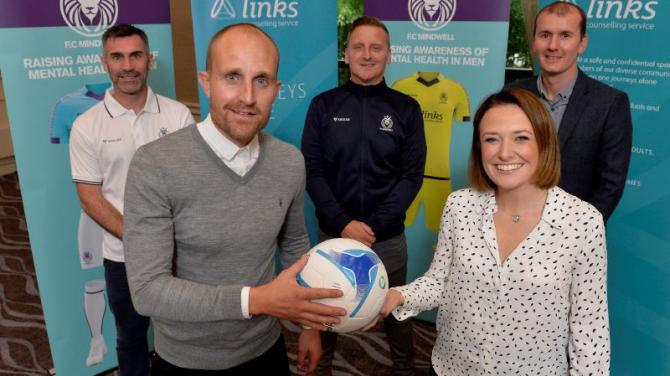 NORTHERN Ireland's first football club dedicated to helping people with mental health issues - which will initially be based at Holm Park in Armagh - was launched this week at the Crowne Plaza Hotel in Belfast.

FC Mindwell will play in the third division of the Mid-Ulster League in the 2020/2021 season.

The squad will be managed by David Dawson and will include a host of former Irish League and Intermediate League players plus Northern Ireland hero Keith Gillespie while ex-Liverpool and England goalkeeper Chris Kirkland is a club ambassador. It is hoped that FC Mindwell will also have a women's team in the future helping women who have been affected by mental health issues.

The club plans to support and help its members, players and fans by offering resources and information enabling them to seek help or talk about any issues they may have. FC Mindwell will work in conjunction with the Links Counselling Service, a charity that provides therapeutic support to the community with the aim to prevent mental health illness from occurring in families and individuals by offering early intervention.

Co-founder Brian Adair said: "During lockdown, when the coronavirus pandemic hit Northern Ireland, myself and ex-footballers Glenn Emerson, Conor Larkin, Kevin Henry and Michael Green spoke to each other about how much we missed playing the game. Within a month we had formed a committee, the club had a name and the vision to make FC Mindwell a force to engage and work with former semi-professional footballers with mental health issues had been realised. We want to do all we can to help with people's mental health which is one of the biggest issues facing society today. On Saturday the team won their first pre-season friendly and already some players have said the club has given them a purpose in life again.

"We have so many people to thank as we start this journey from the FC Mindwell committee to all the players and management to the Mid Ulster League who have been very accommodating and of course Armagh City, who are allowing us to use their ground Holm Park for our home fixtures. In the future we have plans to have our own facility which will not only be used for football but to offer counselling for those affected by mental health issues."

Chairman Andy Cully said: "I am honoured to be involved with our new football club FC Mindwell. Our ethos is entirely centred around the mental health and wellbeing of players, giving them the opportunity to pull the boots on and play competitive games. We are delighted to have on board our charity partner 'Links Counselling Service' and look forward to working with them over the season."

Club ambassador Chris Kirkland said: "I'm delighted to be involved with FC Mindwell. What they are doing with mental health and highlighting the issue is fantastic. I know from personal experience how difficult it can be with mental health so to set up a football club to help people with this in mind is extremely important and I'm very pleased to be part of it."

The club intends holding a host of charitable fundraisers in the weeks and months to come starting on August 14 with a golf day at Lurgan Golf Club. (Contact Glenn Emerson 07800623849 for details).