RICHARD BULLICK: Is it time to re-think the penalty kick? 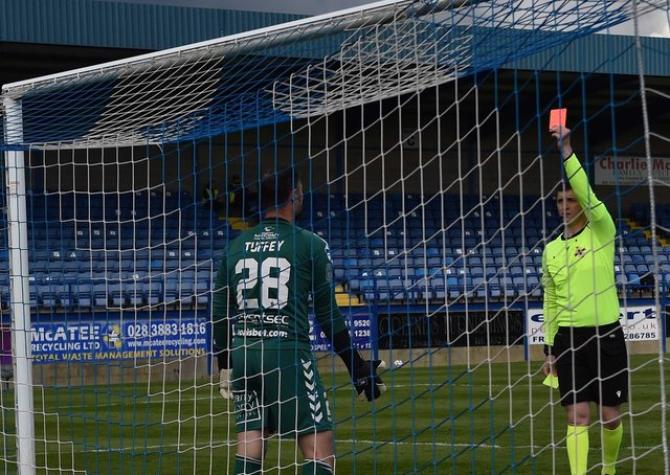 Coming from William McCrum’s part of the world, this sounds sacrilegious, and risks the ire of my Ulster Gazette colleague Joe McManus, but is it time to tinker with the penalty-kick?

Last week, we had the Irish Cup drama with the Crusaders goalkeeper pinged repeatedly for coming off his line too early and eventually dismissed during a shoot-out which Larne won.

Then came the Europa League final in which Manchester United goalkeeper David de Gea was the only one of the 22 players on the field who didn’t hit the net after a drawn game.

The epic created plenty of suspense, but did revive debate afterwards about whether the odds in such scenarios are too heavily weighted in favour of those taking the spot-kicks.

That brings us to hockey, with the European Championships coming up which should see local star Lizzie Colvin reach the remarkable milestone of 200 caps for Ireland.

The heroics from the girls in green at the 2018 World Cup, when as rank outsiders they reached the final against all the odds, brought hockey to the attention of a new audience.

Ireland won a couple of shoot-outs in the knock-out stages and watching how these are conducted in hockey was fascinating for those who don’t normally follow the sport much.

For anyone who doesn’t know, what happens in hockey is that the player starts dribbling the ball from 23 metres out in a one-on-one against the keeper and has eight seconds to score.

Of course, this method can cause controversy too with scope for arguments about technical infringements and so forth, but it’s captivating viewing and a wonderful test of nerve and skill.

Goalkeeper Ayeisha McFerran from Larne emerged as a huge hero during the World Cup and also when Ireland won a shoot-out against Canada in Dublin back in November 2019.

That booked the Irish women’s team’s tickets to the Olympics for the first time ever and hopefully, pandemic permitting, Katie Mullan’s side will finally get to Tokyo this summer.

Every sport is different and there’s no one-size-fits-all perfect formula but what hockey does offers food for thought as to how football might look at making penalties more creative.

A low-scoring sport like football inevitably produces draws and, especially in international tournaments with no time for replays, that leads to the unsatisfactory scenario of shoot-outs.

England have infamously found themselves on the wrong side of the outcome on a number of occasions, with nightmare memories for big names like Waddle, Pearce and Southgate.

With the odds stacked against them, goalkeepers have little to lose in such scenarios but a golden opportunity to become heroes if they can pull off a potentially decisive save.

It is very different for those taking the penalties as they carry huge weight on their shoulders with the thankless task of being expected to score and the prospect of vilification if they fail.

Nobody’s saying that football should simply adopt the hockey model, but it might be time to consider making penalty kicks a little more nuanced in an attempt to level the playing field.

For example, the goalkeeper could start with his or her feet planted in the back of the net with the entitlement to launch themselves forward the moment the referee blows the whistle.

That would put the onus on the penalty-taker to get on with it and also leave less scope for controversy about whether the goalkeeper had moved too early like at Mourneview Park.

A goalkeeper quick off the mark could close down the angles considerably, so players who scored their penalty would receive credit rather than those missing being branded villains.

Penalty kicks to decide drawn games in soccer are nothing new but it is regrettable that the GAA have showed a real lack of imagination in adopting the same method of forcing results.

As always, like with bringing in the sinbin and using the stop-clock, the LGFA are way ahead of their male counterparts and instead deploy a free-taking contest rather than penalty kicks.

Like the penalty strokes in hockey, what happens in ladies gaelic or rugby is a much better test of a sport’s relevant skills rather than a loaded lottery like in men’s gaelic or soccer.

We can talk about the specific Irish Cup controversy on another occasion and the fallout from what happened, but it’s time for wider debate about how we decide drawn games.

Like bowl-outs in cricket which go beyond the first five attempts on either side, long drawn out penalty shoot-outs in football become a lottery featuring diminishing skill-sets.

De Gea can’t really be blamed much for not scoring that fateful final penalty as he was United’s last resort and taking spot-kicks is far removed from his normal remit as a keeper.

At least cricket has innovated with the ‘super-over’ concept to deliver a result in the event of scores being tied, while hockey has the imaginative method described above.

So perhaps it’s time football followed suit, though it must be acknowledged that the sport’s relative simplicity is one of the main reasons why it is the most popular code worldwide.

Significant change to the rules, such as the introduction of a sinbin, are generally resisted and the embracing of technology hasn’t been without opposition, problems and controversy.

The use of the video assistant referee (VAR) has almost spoiled football for some and there are still many heated debates about whether correct decisions are reached in the end.

That’s because there are a lot of subjective calls in all sports and the downside is constant stoppages for checks, plus the spontaneity of goal celebrations being badly compromised.

However, rugby has got used to the existence of the television match official (TMO) over recent years and television viewers can listen in to their discussion with the on-field referee.

Cricket has the ‘third umpire’ adjudicating on decisions behind the scenes and, although having to wait for a review after a match-winning wicket can be anti-climactic, such is life.

Nowadays, we have goal-line technology in football, the ‘snickometer’ in cricket and the use of ‘hawk-eye’ in some sports, including hurling, in the name of getting close calls correct.

Everything has to evolve in the name of progress and the odd sacred cow may have to be slaughtered along the way so the penalty kick in football need not be considered sacrosanct.

The original penalty kick was invented in county Armagh so it would be fitting if the inspiration for a modified form of penalties came from a match held at Mourneview Park!