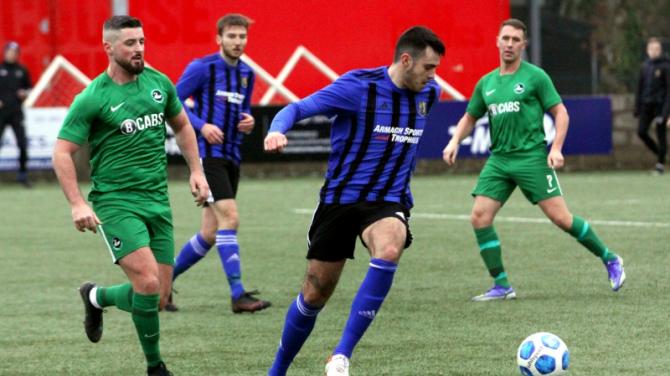 ARMAGH City have returned to the top of the Lough 41 Premier Intermediate League table.

Following the double whammy of back-to-back defeats by Dollingstown in the Bob Radcliffe Cup final and the PIL, they regained pole position by virtue of their 2-1 victory over Newington in Saturday's second versus first clash at Holm Park.

As well having arrived as PIL race leaders, the guests had lifted the Steele and Sons Cup on Christmas morning.

However, they had suffered an Irish Cup defeat by Queen's University seven days before their Holm Park visit and with the hosts knowing they themselves had to return to winning ways in order to put themselves right back in contention for promotion, the scene was set.

Home manager Shea Campbell was back in the dug-out having recovered from illness and he made several changes to the line-up. Paudie Judge, Ruairi Duffy and Ryan Corrigan started and there was a debut for Ben Mullan following his arrival from Warrenpoint Town, while Dermott McCaffery, Jordan King and Scott McCann were named on the bench.

The early pace was brisk, with City making it plain they were in no mood to take a back seat. So it was something of a body-blow that they went 1-0 down when a headed clearance following a long throw fell to Gary Warwick who drove the ball past Conor Byrne in the home goal.

Boosted by that breakthrough the visitors pushed for a second goal, but solid defending by Jon Carlin, Judge and Ben Mullan kept them out. And at the other end, Conor Mullen and Marc McConnell looked threatening in the course of several sorties.

A Newington attempt shortly before the break was spectacularly saved by Byrne who not only leapt high to his left but also managed to hold the ball. Remarkable goalkeeping.

The second period saw City begin to look more threatening and they thought they had equalised, only to see Neil Kerr's header ruled out following a hotly disputed offside judgement.

But on 56 minutes there was an equaliser and this time it stood. It came when Judge intercepted a long ball and ran to the half-way line from where he played a superb defence-splitting pass which wrong-footed the Newington rearguard. Conor Mullen fastened onto it, cut in from the left and slotted the ball low into the net - 1-1, game on.

With City in the ascendancy, Shea Geraghty made way for Ross Lavery who has had a very stop-start season due to injuries. He settled in immediately, making his presence felt alongside Conor Mullen.

Together they caused problems for the Newington defenders and City went close when Carlin, who had moved upfield for a corner, hit the angle of the goal.

Corrigan was withdrawn after taking a knock, with McCann deputising. Jack Clarke also was injured and although he attempted to continue, ultimately he had to concede defeat, leaving Andy Wilson to take over.

With the visitors looking leggy, City pushed on for a winner. And in the 89th minute they got it when Lavery struck, sparking wildly enthusiastic celebrations which were totally understandable in the circumstances.

Armagh had been disappointed to have drawn rather than won these two well-matched sides' previous encounter at Solitude. There was no such frustration on this occasion, however.

This win puts City a point ahead of second-placed Bangor who have two games in hand. That said, they still have to visit Holm Park.

Newington are third, a point behind Bangor, though they too have a game in hand of City. So it's now a question of who blinks first as the race for the title hots up.

This Saturday City will be in action again at home when they entertain Immaculata in the 3rd round of the Intermediate Cup.

The kick-off is scheduled for 1.30pm, but City are hoping to get that changed to 2 o'clock, so keep an eye on the club website.