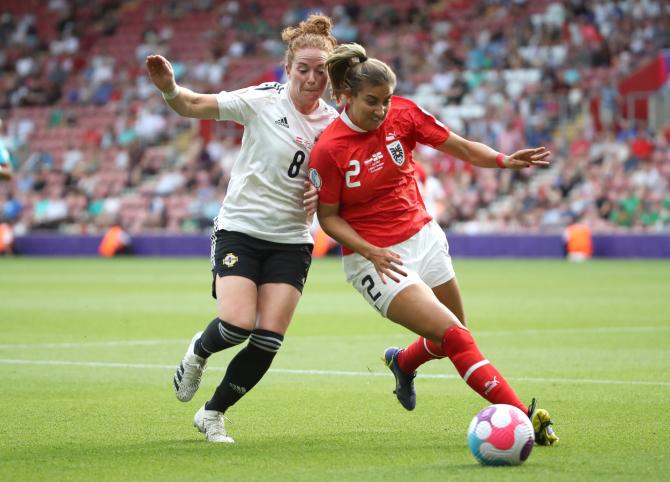 Northern Ireland’s women are still without a point after suffering defeat in Monday afternoon’s Euro 2022 game against Austria.

They lacked any real presence in the final third which ultimately made the difference between the two teams.

There were flashes during the game at a sweltering St Mary’s in Southampton that Kenny Shiels’ side could play and could attack, but they were unable to turn the possession that they did have into real goalscoring opportunities.

Northern Ireland soaked up a lot of early pressure with their only real change of the opening period, a long range drive by the dangerous Lauren Wade, gathered up by the Austrian goalkeeper Zinsberger.

That Austrian pressure finally paid off on 19 minutes after Demi Vance brought down Julia Hickelsberger-Fuller. The resulting free kick was driven low and was flicked in by Austria’s captain Katharina Schiechtl, who took advantage of some poor marking.

Northern Ireland finished the first half strongly and Cliftonville’s Kirsty McGuinness tested Zinsberger with a long-range left-footed shot before the break.

At the other end Jackie Burns had to back-pedal to pull off a great save to tip a dipping effort by Barbara Dunst onto the bar after the goalkeeper had given the ball away from a back pass.

Burns was counting her lucky stars around the hour mark when Dunst’s half volley slipped through her fingers but deflected over the bar.

Northern Ireland grew into the game as the second half progressed. Rachel Furness’ header, after good pressure from McGuinness had won a corner, looped over the crossbar.

This was a game that Kenny Shiels had earmarked as one that Northern Ireland could possibly get something from. However, their hopes were dashed with two minutes left in the game when a pass was misjudged by Abbie Magee. Katharina Naschenweng skipped past Sarah McFadden and fired into the far corner of the net.