Dominic to be inducted into the Harps Hall of Fame 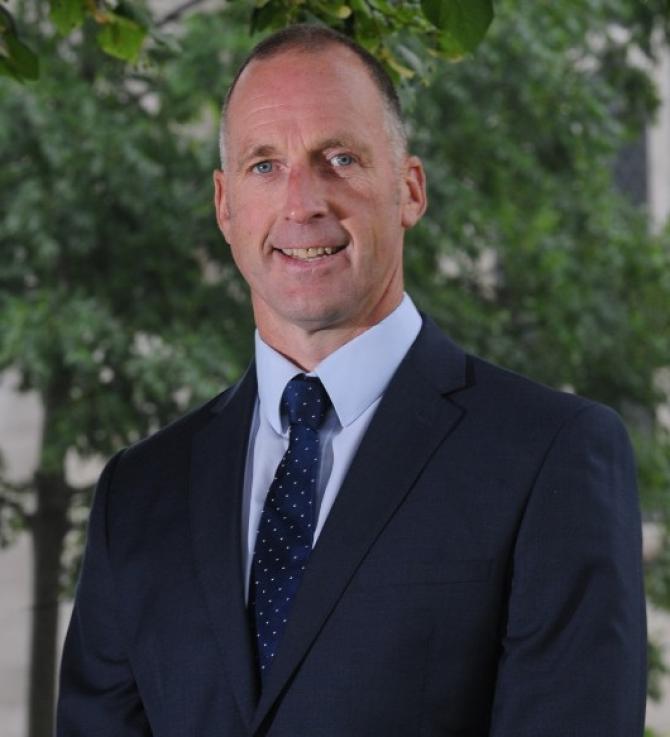 Dominic Clarke, principal of St Patrick’s Grammar School, who is to be inducted into the Armagh Harps Hall of Fame. Picture by John Merry.

ARMAGH Harps, the County Senior Champions, will be presented with their Senior Championship winners medals at a Presentation Night in Armagh City Hotel this Saturday, February 17.

After a dearth of 26 years Harps defeated holders Maghery 2-09 to 0-11 in a pulsating battle in the Athletic Grounds on October 15, to take the crown back to Abbey Park.

Guest of honour on the night will be St Patrick’s Grammar School principal Dominic Clarke, who be inducted to Harps Hall of Fame.

Participants will enjoy a four course meal before Aidrian Logan comperes the various presentations, while the fabulous Marty Fay band will provide the entertainment.#

A citation reveals why the 2017 Hall of Fame inductee is such a worthy recipient.

”Dominic Clarke is an avid sportsman and he has played many sports to a high level: Gaelic football, rugby, basketball, swimming, cycling and running are among sports which have been graced with his skills. However it’s his association with Gaelic football that Dominic is remembered with both affection and reverence.

”Being a grandson of the Harps stalwart and founder member John McCusker and coming from a renowned Harps family it was inevitable that these influences would rub off on young Dominic who at the age of thirteen made his way to the farmyard gate at the old College Fields to begin a long association with Armagh Harps.

”Dominic began his playing career with Harps Under 14’s. He fondly remembers the impact of his first coaches including Eamonn O’Hagan, John McCarthy and Barry Randall. Mick Higgins’ admiration for the Club resonated with Dominic who quickly appreciated that he was part of more than just a football team. Dominic continued through the underage structure playing Under 16 and Minor and in 1983, as a fresh faced seventeen-year-old, his prowess as a footballer was recognised and he was promoted to the ranks of the Senior squad. Dominic was now part of a very progressive team that was destined to enter the realms of history. By now Dominic was balancing his Harps’ senior role with that of a county minor and represented his county in the ‘84 minor final- the game that preceded the infamous ‘Frank McGuigan’ senior final.

”In 1984 Dominic’s senior Harps career accelerated. He played full forward in the senior semi-final in the Grange against the seemingly unbeatable Clans. Dominic was totally unfazed that he was being marked by the then County star Jim ‘Titsy’ McKerr and his personal contribution aided Harps reach the County Final. Unfortunately, despite his efforts at wing half forward in the final, Harps were unable to get over the line. Dominic was denied a brilliant goal in the game by the Keady keeper in the first half. This was to prove a pivotal moment in not just this game but in subsequent county finals. In a low scoring game the “goal” would most likely have been the winning of the game and would have been the catalyst for a young Harps, as County champions, to achieve their potential in subsequent years. Dominic still playing at U21 level too, was to suffer the agony of under U21 final defeat in ’86, sandwiched between senior final defeats in both ’85 and ’87.

”In addition to his sporting prowess Dominic was also an accomplished student and enrolled to study at the University of Ulster in 1985. The wily Tommy Joe Farrell recognised Dominic’s talent and quickly selected him for the ‘Freshers’, going on to win the Freshers All Ireland Final in 1986, and progressed through the student ranks to represent Jordanstown at Sigerson, playing with inter county players of the calibre of Dermott McNicholl and DJ Kane, winning a Ryan Cup medal along the way. As a student Dominic spent the summer of ’85, ‘86 and ’87 in ‘the States’. He connected with the local GAA fraternity and represented New York. He fondly recalls turning out in Gaelic Park with his good friend and fellow Harps stalwart Declan ‘Bert’ Toal.

”Following the completion of his USA visits Dominic was keen to fully reconnect with Harps for the ’88 season. In 1988 his career took a different turn when Bainisteoirs Peter McGleenan and Marty Kelly lined him out at full back. Dominic fully committed to playing in the senior ranks and his efforts were rewarded as he was soon to make the number three jersey his own. In 1989 he was an integral member of the team now led by Fr Peter Kerr that was to secure the McKillop Cup. Heartache was to follow as the boys were unsuccessful in achieving back to back championships when they were defeated in the 1990 final by Sarsfields. Undeterred Dominic and his fellow team mates had full confidence in their ability and their faith was restored by winning the League/Championship double in 1991!!! In the Ulster Club Championship Dominic showed that he still retained the skills that had seen him recognised as an accomplished forward when he scored a tremendous point while lining out at full back. Dominic continued to represent the Club and under the tutelage of Paul Grimley, and still at full back, played in the team that unsuccessfully contested the 1995 Championship final. Dominic undeterred continued to demonstrate the strengths he was renowned for, both physical and mental, and continued to represent his Club, playing full back, centre half back and midfield, through to 2003 when he decided to hang up the boots!

”Dominic’s excellent performances with his Club did not go unnoticed and he was drafted into the county panel in 1990 by the management team of Jim McCorry and John ‘Beefer’ Morrison. Times were lean for the county but Dominic was always there, giving 100%. With great satisfaction he recalls his proudest county moment when with three Club mates, the Grimley Twins and John Toner (and jointly managed by another Club man, John Morrison) they got to the National League Final in 1994.
”In the late ‘90’s, in addition to his extensive playing role, Dominic was eager to give something back to his Club and simultaneously developed an interest in the coaching side of the game which matured rapidly over the coming years. He was a firm believer of the benefits of coaching future players from a young age and initially focussed on the younger members. He aimed to instil in these young players the competencies that would facilitate them to represent their Club (and indeed County) in future years.

”He, with his former playing colleagues brother Andrew and John Toner, took the ‘minors’ in 2000 and this team progressed to be Armagh and Ulster champions in 2002/3. Dominic was keen to advance his coaching credentials and managed Lisummon where he led them to the Junior Championship in 2004, played of course in his beloved Abbey Park! He then returned to manage Harps seniors in 2006. Times were difficult and success was limited but Dominic was keen to continue to blood and develop players knowing that the future would be bright. He stuck to the task and testament to his coaching skills he produced players who subsequently went on to represent their Club and County at the highest level- players of the calibre of Charlie Vernon, Paedar Toal, Gareth Swift, Gareth Richards, Kevin Morris and Joe Quigley who all won U21 All Ireland medals!
”Dominic however did not rest on his laurels. In 2016 he teamed up with his former friends from his playing and managerial days, John Toner, Malachy McCoy and Andrew Clarke, to add his considerable experience to the senior management team. Dominic was adamant that this squad had what it takes to win the Championship and his input helped them get to the Promised Land when after a dearth of 26 years Harps, on 15 October 2017, they won the coveted Senior title.

”It is Dominic Clarke’s magnificent extended service to his Club and contribution to Gaelic games that makes him a worthy recipient of Armagh Harps’ Hall of Fame for 2017.”