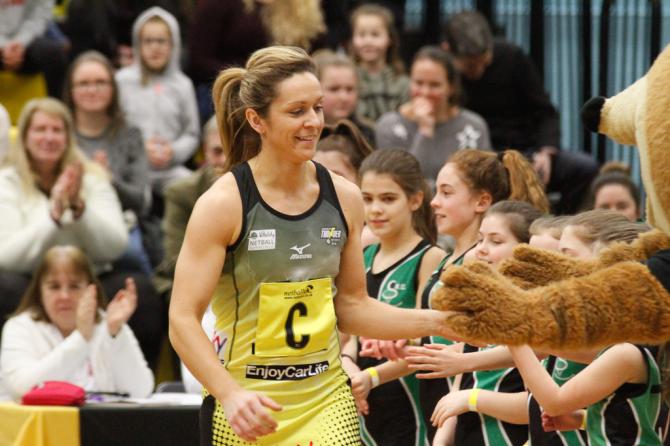 The Armagh gaelic ace and Northern Ireland netball captain was honoured with a Special Recognition gong, sponsored by Volvo, at the Belfast Telegraph Sports Awards banquet at the Waterfront Hall.

Fittingly the award was presented by 1972 Olympic heptathlon champion Peters, who remains a famous figurehead for sportswomen in Northern Ireland and has followed O’Hanlon’s exceptional career closely.

“Caroline is a wonderful athlete and a great role model who is a very worthy winner of this award. She’s really amazing because she’s also a doctor. I know she will inspire a new generation of sportswomen in Northern Ireland and that’s so important,” enthused Dame Mary after handing over the trophy on stage.

Motorcycling world champion Jonathan Rea won the top prize of Sports Star of the Year at the prestigious event which has become established as Northern Ireland’s regional equivalent of BBC Sports Personality at UK level.

The award win was gratifying enough in itself for O’Hanlon but the 33-year-old admitted that having one of her heroes doing the presentation on stage was the icing on the cake of a very special evening for netball, which also saw Northern Ireland supremo Elaine Rice rewarded in the Coach category.

O’Hanlon’s NI side was honoured with the Team of the Year (Gold) award on the back of a memorable 2017 which saw them win nine out of 10 Tests, beat Barbados in the Quad Series final, win European Championship silver medals, qualify for the Commonwealth Games and World Cup and reach an all-time high of eighth in the world rankings.

“It was an amazing night for netball. At times through the years we’ve struggled for visibility but the hard work has brought success and this recognition is fantastic for the sport here,” enthused Caroline.

“As a Manchester United fan it was great to have Norman Whiteside presenting the team award, which I had the honour of receiving as captain, but to then have Mary Peters presenting my own award was really special.

“She’s just a wonderful lady and I can’t say enough good about her. Through the decades she has used the goodwill and fame from her personal success for the benefit of sport in Northern Ireland, especially encouraging young people, females and the less self-sufficient sports.

“The Mary Peters Trust has been a great supporter of Netball NI. Most of our senior side have received her bursaries at some stage, myself included, so she should definitely share some of the credit for our success.

“She’s also an incredible inspiration for females in sport. Nobody playing now was even born when Dame Mary won her Olympic gold medal but it was such a famous success there’s still a real awareness of that achievement.

“So I was very proud to receive my award from a real living legend. She’s so gracious, shows a genuine interest and has always warm words of support and encouragement for sportspeople she comes into contact with.”

O’Hanlon’s award went wider than just the last 12 months, so reflected her remarkable record of successfully combining being a top player in two sports for so many years with a demanding professional life as a doctor.

An established star for both teams for the past decade and a half, O’Hanlon has made more appearances than anyone in history for both the Armagh ladies gaelic and Northern Ireland netball teams.

At an individual level, she was crowned All Ireland Player of the Year in ladies gaelic in 2014, has been nominated for the All Stars nine times and picked up overall Player of the Tournament awards for netball’s 2010 European Championships and the Nations Cup five years later.

She has been a successful captain of both teams, including leading Armagh to the Ulster title, back-to-back promotions in the National League and consecutive All Ireland semi-finals in ladies gaelic and skippering Northern Ireland’s netballers to their historic high of eighth in the world.

Domestically, O’Hanlon has captained her respective clubs in both sports for over a decade with considerable success, including three Armagh gaelic county title triumphs with Carrickcruppen while Lisburn-based Larkfield are set to be crowned NI Premier League champions for a fifth year running.

In 2017 alone, as well as her tremendous success with Northern Ireland, O’Hanlon shone for the new Scottish Sirens franchise in netball’s British SuperLeague, played in the inaugural British Fast5 event at London’s O2 Arena and won Player of the Tournament as Ulster retained their interpro title in ladies gaelic.

She has recently embarked upon her 17th consecutive inter-county season in the orange jersey of Armagh, made her SuperLeague debut for Manchester Thunder at the weekend and is set to captain Northern Ireland at April’s Gold Coast Commonwealth Games in Australia.

A former NI Sportswoman of the Year, O’Hanlon’s latest award is well deserved and overdue recognition of an outstanding sportswoman and her remarkable achievements over a prolonged period.

On Saturday evening, O’Hanlon made her British SuperLeague debut for Manchester Thunder, who came from 10 goals down at one point to win 48-47 away to Severn Stars in Worcester and next Monday night she will play her first competitive home match at home to her previous side Scottish Sirens live on Sky Sports (7pm).

It will be another busy weekend for O’Hanlon as the previous day she will be in Sligo for Armagh’s rearranged National League game which fell foul of the weekend’s wintry weather.

The match between the two teams with 100 percent records in Division Two, Tyrone and Tipperary, was also postponed so James Daly’s Cavan went top by winning at Clare.