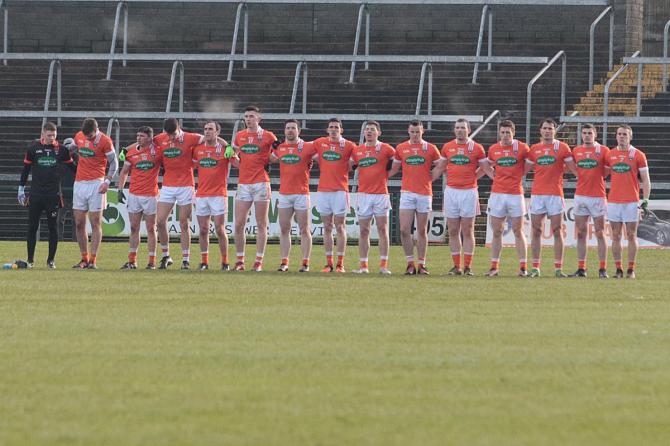 Armagh secured their third victory in a row against Longford at the Athletic Grounds on Sunday to stay top of the Division Three Allianz National League table. Picture by VINCY LOUGHRAN

THE   word ‘steal’ was liberally bandied about in conversations after Armagh secured their thrid victory in a row to stay top of the Division Three Allianz National League table.

At no stage in the game did Armagh play to their best as they had done in their opening game victories over Sligo and Westmeath. Longford had given the Orchard in the first half a masterclass in pressing, fluid and mobile passing moves using the full width of the field and penetrating for scores at opportune moments.

In the second half, neither side warmed the crowd with quality football, but even though Longford’s play dropped several ‘notches’, Armagh were always chasing the game. It was noteworthy that having lost their two best players, midfielder Andrew Farrell and centre forward player, David McGivney to a red card and a black card respectively, Longford still were able to fence Armagh to have to chase the game and they laboured somewhat in doing so. Even so Armagh, for long periods hung in, and showing huge reserves of patience and character, kept themselves close enough to still have a chance of plundering a lead. With just six minutes to go, however, and with Longford leading by four points; 1-10 to 0-9, it looked as if victory was beyond Armagh’s reach. In those six minutes, plus another five of injury time, Armagh displayed a hunger and desire to grab victory which endorsed the strong team spirit that has developed since their excellent qualifier run last season despite the defections which have occurred since.

It was no surprise then that for most of those final 11 minutes, Armagh at last penned a very competitive and worthy opponent, Longford deep inside their own ‘45’. As a result, Niall Grimley (free) and Rory Grugan (delightful long-range winner) posted points either side of a viciously volleyed goal by Ethan Rafferty (possibly Arnagh’s ‘Man of the Match’) to secure a shaky but gutsy win rather than a ‘stolen’ one.

Few Armagh players really shone on Sunday, yet all ‘gave their all’ for the cause, but Ethan Rafferty (1-4), Rory Grugan (0-3), Brendan Donaghy and Aidan Forker each had significant and influential performances throughout by their leadership and willingness to stand up to everything that was thrown at them. Gregory McCabe, Stephen Sherdian throughout and Niall Grimley, in the later stages of the game, made noteworthy contributions.

It was Longford, who set the pace and tone of the game from the throw-in for virtually most of the game, did look like likely winners given that having opened the scoring on three minutes, they were crucially never behind until Armagh’s winning point in the fifth minute of injury time.

Given how well they’d won their first two games, Armagh were expected to breeze confidently into this game. It was, however, Longford who fulfilled that role as Longford were assured on the ball, using controlled possession football. The midlanders play was coordinated and possession was maintained by quality advantage ball. The half was a masterclass by Longford on how to keep possession as they, using width, pulled Armagh all over the field in a chasing game. Armagh looked short of pace with defenders marking from behind, while going forward they looked static in a slow build-up, in contrast to Longford’s fast-paced, penetrative constant movement which reminded me of what Dublin did to Tyrone in last year’s semi-final. Throughout the first half, the triangle of wing-backs Michael Quinn and Daniel Mimnagh together with excellent midfielder, Andrew Farrell caused havoc in the Armagh ranks. In doing so, forwards Robbie Smyth and Dessie Reynolds tormented the Armagh defence with well-crafted scores. Robbie Smyth and Ethan Rafferty exchanged early points before a passage of sustained play saw Longford build a three-point lead through David McGivney (two frees) and Daniel Mimnagh. By this time Armagh had hit four dropped short attempts and had two shots hit off posts to safety. Armagh did stir and found some resolve in a three-minute spell which brought a break ball and long range point from Stephen Sheridan; a Rory Grugan point from Charlie Kernan’s pass which  Longford’s excellent keeper, Paddy Collum helped over the bar and a superb Ethan Rafferty point after good approach work by Ryan McShane and Rory Grugan to leave the sides back level at four points each.

Longford answered Armagh’s challenge with three points without reply of their own via a Robbie Smyth brace and a Michael Quinn angled point from a Andrew Farrell pass. By the interval, Ben Crealey and Dessie Reynolds had exchanged points as an outplayed, slightly outclassed yet still in contention went in a catchable 8-5 down.

Armagh needed an emphatic start to the second half but the goal they required took a whole half before, thankfully, it was delivered. Armagh were passing high and play was up in terms of intensity, but overall the game became mediocre, scrappy even though Longford were still pulling Armagh all over the place but now only in their own half of the field. While Armagh stayed wasteful, Longford, having lost influential players, were now restricted to containment to secure victory. It was no surprise then that Armagh outscored Longford by 1-6 to 1-2 in the second half.

Only two scores came in the third quarter via a Rory Grugan (free) and Dessie Reynolds exchange. Inside three minutes, unanswered points by Ethan Rafferty and Gregory McCabe brought the sides level for only the second time in the game. There were seven minutes left and the next score would be crucial. Armagh hearts sank as that score – a goal – came to Longford. James McGivney’s defence splitting pass found Dessie Reynolds clear on goal, but his volley was straight at helper, Blaine Hughes who blocked the ball down. As it spun on the ground, an Armagh player was ajudged to have fouled the ball on the ground. Captain Donal McElligott’s penalty was sent low to the corner of the net. When James McGivney added a point and Armagh went four down it looked as if their chance of victory had gone. Not so, it transpired, as Armagh’s strong team spirit drove the team on. Niall Grimley landed an angle free and with normal time almost up in a high ball on saw Donal McElligott gain possession which was spilled with some Longford folk claiming Donal was fouled. No whistle was blown as Ethan Rafferty grabbed the loose ball and on the turn viciously volleyed the ball to the net. The sides were level as injury time was announced.

Another five minutes were flagged up and in the last minute of injury time and the game, Armagh recycled the ball cross field with Aidan Forker’s deft pass setting up captain, Rory Grugan to deliver the match-winning point. The delirious out-pouring of joy in an unlikely victory by the Armagh players on the final whistle endorsed that they didn’t ‘steal’ victory, but in fact, were rewarded with victory by refusing to quit when the chips were down. Well done Armagh!