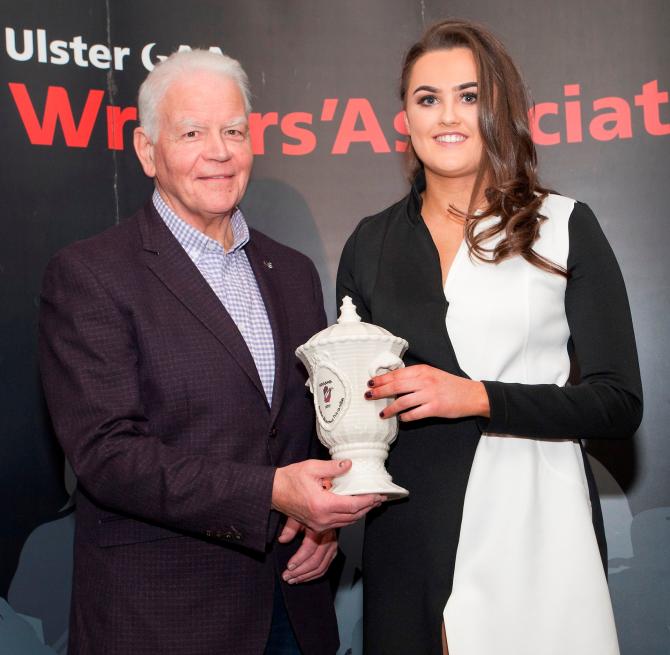 ARMAGH ace Aimee Mackin has been crowned Ulster Ladies Footballer of the Year on the back of another prolific campaign for the Orchard outfit in 2017.

The Shane O’Neills forward, who won her second All Star last November, was honoured by the Ulster GAA Writers at their recent banquet in Monaghan for her exploits during a season which also brought the second All Star award of her career at the age of 20.

Although Armagh’s season promised more than it delivered, Mackin beat players from more successful counties to this prestigious title, perhaps helped by her stunning goal in the All Ireland quarter-final defeat to Kerry.

The clip of that fantastic finish went viral while other highlights included the then teenager’s significant contribution to Armagh’s first ever victory over the then All Ireland champions Cork followed by an historic away win against Dublin.

Aimee played every minute of the 11 competitive matches Armagh had in 2017, in spite of breaking her finger late in the All Ireland qualifier against Westmeath two weeks before that defeat to Kerry at the last eight stage.

She top-scored in 10 of those games, including five points as Armagh scalped Cork at Clonmore and a fantastic 1-9 in the convincing victory at Abbotstown over a Dublin team who would go on to be crowned All Ireland champions six months later.

Still a teenager during the National League, Mackin continued her prolific feats after turning 20 with a combined haul of 4-15 in three Championship matches, though the Orchard campaigns proved disappointing.

That gave Aimee an Armagh aggregate of 6-61 for the season and her exploits proved enough for the Camlough girl to win an All Star as one of only three Ulster players alongside Donegal’s Hegarty sisters, Ciara – her closest challenger for the GAA Writers’ award – and Niamh.

Mackin has secured All Stars for two of her three senior seasons with Armagh to date and in between was honoured as Gaelic Life Ulster Club Player of the Year for firing Shane O’Neills to the Ulster Intermediate title.

Part of the historic trip to China by her club Shane O’Neills just after Christmas, Mackin will be back in the Far East again next month when the All Stars go on tour to Thailand and is set to keep flying the flag for Armagh at national level for many years to come.

Although Armagh haven’t had the start to 2018 they would have hoped for, Mackin top-scored with 1-5 in the home defeat to Tipperary in the Orchard’s opening National League game.

She also led the way with eight points in the away draw with Cavan, her superb last score in injury-time ensuring that the Orchard didn’t leave Templeport empty-handed, and again topped the scoring charts with 2-5 in Sunday’s away win against Sligo.