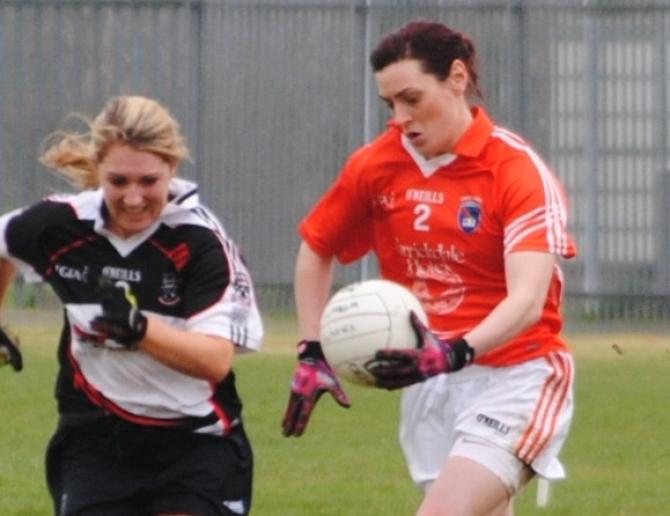 ARMAGH ran riot in the rain in scoring a magnificent seven goals against Sligo as they made light of tricky conditions to finally notch up an emphatic first win under new managers Lorraine McCaffrey and Fionnuala McAtamney.

Helpless hosts Sligo reaped the whirlwind at Dr Kent Park where the Orchard outfit put the frustrations of the past few weeks behind them in stunning style as they got off to a scintillating start and never looked back.

After the frustrating home defeat to All Ireland Intermediate champions Tipperary and dramatic draw with Ulster rivals Cavan, a trip to Sligo always looked like a decent chance for Caoimhe Morgan’s team to get their NFL Division Two campaign properly up and running.

The wintry weather meant Armagh had to wait an extra seven days to get playing this game but they certainly made up for lost time as midfielder Fionnuala McKenna hit the net in the opening minute and a point apiece from Lauren McConville, Marian McGuinness and Blaithin Mackin quickly followed.

Benched for the first two games as an apparent sanction for returning late to pre-season, Crossmaglen’s McConville was restored to her rightful place in the starting team and took only a minute to get on the scoresheet.

Although she had earlier won a penalty for Aimee Mackin, McCoy didn’t register her first score until the 24th minute, by which stage Armagh had already posted 2-12, but she then hit 2-3 herself in a spectacular purple patch of seven minutes in the middle of the second period.

Wing forward Blaithin Mackin was also among Armagh’s six goal-scorers on a very wet afternoon when even the slippery conditions couldn’t save Sligo from being torn to shreds by the incisive visitors.

On paper the weakest side in this division, Sligo had lost their first two fixtures and few would have tipped them to break their duck against Armagh but the hosts could hardly have expected this 30-point home hammering either.

The margin would have been even greater but for the Armagh management taking off the entire full forward line who between them had posted 5-12 of the team’s tally and the visitors didn’t register a single score in the last 10 minutes as Sligo hit an unanswered 1-2.

But by then it was all about Armagh keeping their powder dry for this Sunday’s much tougher test against Tyrone in the Athletic Grounds, though surprisingly former captain Caroline O’Hanlon played the full hour in spite of having two big netball matches in England in between.

O’Hanlon was actually the least prolific scoreboard contributer among Armagh’s front eight with just the one point, though it was a memorable effort from the triple All Star midfielder who went on a surging run from a turnover by Carrickcruppen clubmate Marian McGuinness.

Back in the No 10 jersey she filled in Armagh’s All Ireland Intermediate title winning team of 2012, McGuinness had the distinction of outpointing her famous friend by two points to one, while Kelly Mallon got her first two scores in the orange jersey since 2016.

The experienced Harps forward was sidelined for all of last season with tendon trouble but looks strong again and will be an important player for Armagh in the bigger games ahead.

With an eye to the last two rounds of league games when O’Hanlon will be away with her Northern Ireland netball team at the Commonwealth Games in Australia, it was good to see McKenna in midfield for the first time this season.

She got the opening goal, a point from play and a free all inside the first 13 minutes as Armagh hit 2-10 without reply in the opening quarter and Sligo didn’t get on the board until two minutes before the break courtesy of a long-range free.

They added a goal just before the interval to turn around 16 points down and cancelled out McConville’s opening point of the second half, but by the time the same player raised her green flag on 50 minutes, Armagh had gone an astonishing 35 ahead.
Armagh’s first substitution saw stalwart Sharon Reel, who had been suffering from back spasms on match morning, give way
to Dromintee’s Shauna Grey and the management made five more changes with the win points firmly in the bag.

Forkhill’s Megan Sheridan and Silverbridge schoolgirl Niamh Reel made their first appearances of the season when introduced in place of Carrickcruppen’s Rebecca O’Reilly and McCoy respectively.

Converted keeper O’Hare, Armagh’s regular No 1 last season, had taken over from Carrickcruppen’s Anna Carr in nets in one of four personnel changes to the team which had taken the field for the draw with Cavan.

McConville came in for Murphy up front, McGuinness replaced promising St Peter’s player Tiarna Grimes with McKenna moving to midfield and O’Reilly returned to the defence for Louise Kenny, who had scored the winning goal for St Mary’s University College camogs in a final during the week.

Armagh’s derby battle this Sunday against Tyrone, who lost their unbeaten record this season at home to Tipperary at the weekend in a repeat of last September’s All Ireland Intermediate decider, has been confirmed for the Athletic Grounds (12 noon).