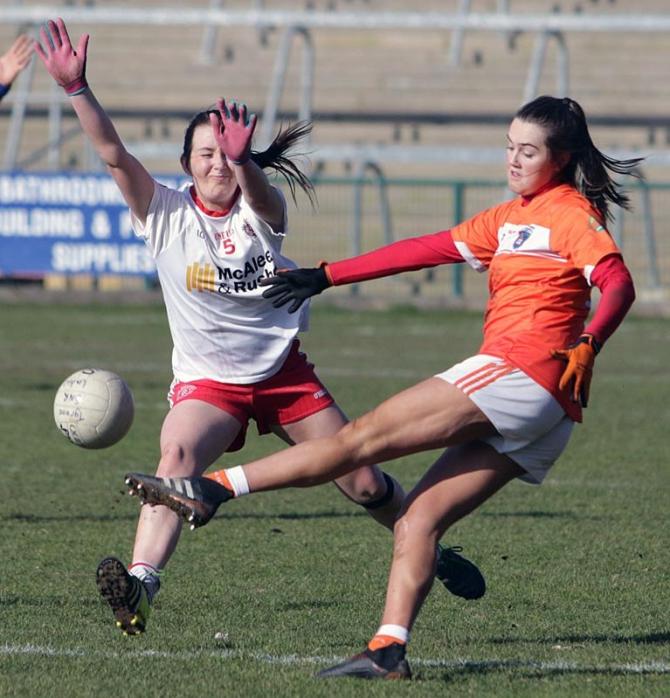 All Star forward Aimee Mackin fires in a shot for Armagh during Sunday's National League game against Tyrone.

ARMAGH  played some simply magnificent football in perfect conditions at the Athletic Grounds as they trounced traditional rivals Tyrone by an astonishing 24 points in the NFL Division Two derby.

It was glorious stuff in the sunshine from the Orchard crew who served up a superb performance on their first outing at Armagh headquarters this season and took their goal tally to 13 on successive Sundays.Crossmaglen’s Lauren McConville hit the Tyrone net twice in the opening quarter and Aimee Mackin raised the Orchard outfit’s fifth green flag as early as the 22nd minute of what was a dream display by Armagh.

In spite of playing into the wind in that opening period, Armagh led by 5-6 to 0-4 at the interval and added 1-8 in the second half, including late points for young subs Niamh Reel and Tiarna Grimes.On an afternoon when there were nine different scorers in Orchard jerseys it was encouraging that All Star Aimee Mackin kicked only two points of Armagh’s first 4-5, though she did finish as the team’s top-scorer for a fourth match out of four this season, with 2-4Likewise the only forward who didn’t get on the scoresheet here was Armagh’s 2017 Player of the Year Aoife McCoy, who had hit 2-3 in a purple patch the previous Sunday against Sligo and often posts significant tallies.McConville didn’t add to the 2-1 she scored in the first quarter but the damage done during Armagh’s blistering start was worth its weight in gold and left Tyrone facing an exceptionally difficult task.

That tough job was rendered impossible by the good Orchard defending which complemented their red hot attacking and in particular the stunning goalkeeping performance from Mullaghabawn’s Caroline O’Hare.Only converted from her original role as a forward last season, O’Hare pulled off a series of absolutely superb saves, some at very close-range, to thwart Tyrone’s attempts to get back into the game and she was also reassuringly safe under the high ball.

As well as the players, credit for this highly impressive performance from Armagh must go to new joint managers Lorraine McCaffrey and Fionnuala McAtamney, who went with a positive approach rather than giving Tyrone time on the ball.Armagh’s marking was very effective for the most part and the home players looked comfortable on the ball regardless of the numbers on their backs against a Tyrone team who came into this match above their hosts in the Division Two table.Both these sides had hammered Sligo away and lost at home to Tipperary but the Red Hand women were ahead of their Orchard counterparts courtesy of a home win over Waterford compared to an Orchard draw with Cavan on the road.However Armagh had shown real resilience that afternoon in claiming a share of the spoils in Templeport rather than sliding to a second defeat in two outings this season and they then cut loose against this section’s weakest side Sligo next time out.

Few would have expected another Armagh scoring spree against Tyrone in what most pundits predicted was likely to be a close contest, though the venue might have been seen as a good Orchard omen.Last time these teams met in the Athletic Grounds an Armagh side which had spent that spring playing two National League levels below their visitors, upset Tyrone by an emphatic 15-point margin in the 2014 provincial championship quarter-final on their way to claiming a first Ulster title for seven seasons.

This match might not have been of quite the same significance but it was far from meaningless either given Armagh’s need for the league points, their desire to do the Athletic Grounds justice and the extra edge which comes with playing Tyrone.Although Armagh hammered Tyrone 3-20 to 0-3 in Drumquin in the opening game of 2016 under Ronan Clarke, their hosts have rebuilt from the sorry state they were in at that stage.Back then troubled Tyrone were whitewashed on their way to relegation from the NFL’s top flight but since then they have reached an All Ireland Intermediate final, brought through an influx of fresh talent from their Ulster Minor Championship-winning side and taken heart from St Macartan’s winning the provincial club championship. So they were regarded as dangerous opponents but Armagh began with real intent, Caroline O’Hanlon attacking from the throw-in and winning a free which Aimee Mackin converted inside the opening minute, though that score was soon cancelled out by a Grainne Rafferty point from play.

Fionnuala McKenna nudged Armagh back in front with a free and Aimee Mackin hit a wide but Tyrone fluffed their kickout and the Shane O’Neills star showed alertness in feeding McConville who went through to finish with conviction.O’Hare made her first fantastic save at the feet of the great Gemma Begley, who had been played in by a sublime ball by Maria Cavanan, captain Caoimhe Morgan mopping up, and her sister Sarah Marley then forced rising star Chloe McCaffrey to over-carry.Begley kicked a free but Aimee Mackin pointed in reply after an imperious 90-metre run by O’Hanlon and then, after Carrickcruppen’s Rebecca O’Reilly won a dropping ball on her own end line, a sweeping Armagh attack led to the hosts’ second goal.

Having chipped in with two points against Sligo, experienced campaigner Marian McGuinness this time helped herself to a goal after good work from O’Hanlon, Aimee Mackin, McConville and McCoy.McConville added a point and then O’Hanlon plucked a long-range Begley free from under the Orchard crossbar in yet another example of small moments which the orangewomen made go their way while Sharon Reel and others typified Armagh’s physical commitment.Canavan, niece of former Red Hand captain Peter, kicked a free but O’Reilly produced a great chargedown on the next Tyrone attack, O’Hanlon had a free moved forward in her own half and launched another raid from which the ever determined McConville netted again.Mallon finished to the roof of the net a minute later and although Tyrone captain Neamh Woods made a great run, Canavan missed the subsequent free and a great run by McConville led to a McKenna point.

Armagh’s fifth goal was a tremendous team effort from deep defence featuring the lively Mairead Tennyson, Sarah Marley and Clodagh McCambridge twice each, and Kelly Mallon before Aimee Mackin cut in along the end line on the left to deliver a typically lethal finish.Canavan drew another blank from a free and then there was more dream football from Armagh with Tennyson, Sarah Marley, Blaithin Mackin and McCambridge combining from the back on one occasion and next time captain Morgan striding forward off a return pass from O’Hanlon after firstly showing her experience in cutting out a Tyrone ball in.O’Hanlon kicked her opening point of the afternoon and O’Hare had two good moments at the other end before pulling off a wonder save from McCaffrey after another great run by Woods.

With Tyrone so badly behind, Begley felt she had to go for goal from close range deep in injury-time but fell between two stoools and drilled wide at head height as Armagh went in 17 points up.Tyrone began brightly in the second half with a Canavan free and point from midfielder Meabh Mallon either side of a wide and it took great team defending from Armagh followed by another top-class save from O’Hare at the feet of Begley to stop them making more inroads.O’Hare climbed above Begley to claim a high ball and then, after McGuinness gave way to young St Peter’s midfielder Grimes, Mallon leaned back and chipped over a wonderfully nonchalant point.Aimee Mackin added a nice left-footed effort a minute later and although McKenna was wide with a free, Begley’s withdrawal was another boost for Armagh just before Aimee Mackin and Canavan traded points.

The battle between Begley and Morgan was a timeless treat which recalled a bygone era but uncharacteristically the Carrickmore women’s solitary scoreboard contribution was one free and she gave way to Peter Canavan’s daughter, Aine, midway through the second half.O’Hanlon hit her second point following good work by McConville and, although Mallon kicked a wide, Blaithin Mackin joined the list of scorers with a point to make it 5-11 to 0-7.Niamh Reel and Louise Kenny replaced McCoy and O’Reilly respectively with the Silverbridge schoolgirl soon setting up Aimee Mackin for her second goal just before Dromintee’s Shauna Grey took over from Blaithin Mackin.

Canavan and McKenna exchanged scores to maintain Armagh’s 22-point advantage and two more Orchard changes saw Megan Sheridan and Niamh Murphy introduced in place of Tennyson and Aimee Mackin.There was time for home subs Reel and Grimes to complete the rout, the former then leaving the field to let young Shane O’Neills forward Aoibheann Jones take the field as Armagh’s seventh sub of a memorable afternoon.All Ireland Intermediate champions Tipperary maintained their 100 percent record with a notable away win, by 1-13 to 3-4, against former Armagh manager James Daly’s previously unbeaten Cavan as they seek to emulate the Orchard outfit’s feat of back-to-back promotions in 2014 and 2015.Waterford are now in second place courtesy of a 2-13 to 2-5 home win against pointless Sligo while Clare warmed up for this Sunday’s visit of Armagh with an agonising 3-11 to 3-10 loss away to a Laois side who were recording their first victory of the year.Free-scoring Armagh, whose points difference is the best in the division, have climbed above Cavan into third place on points difference with Sunday’s defeat pushing Tyrone down into fifth place, the position they finished in last season.