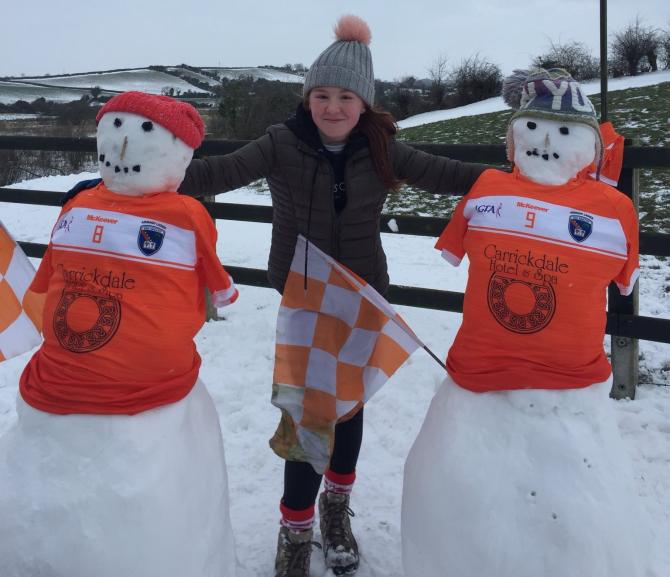 THE wintry weather thwarted Armagh’s hopes of making it three wins in three weekends in Division Two when Sunday’s scheduled clash with Clare was called off, but the Orchard outfit can still go into this month’s break in Lidl National League games in positive spirits.

From being beaten at home by newly-promoted Tipperary in their first fixture under new joint managers Fionnuala McAtamney and Lorraine McCaffrey to trouncing traditional rivals Tyrone by 24 points in the Athletic Grounds, Armagh have shown pleasing progress.

Losing a healthy lead in the second half against Tipp in Silverbridge represented a disappointing start but the boot was on the other foot next time out when they clawed back a big deficit to claim a share of the spoils away to much-fancied Cavan.

Putting pointless Sligo to the sword was an emphatic first victory but taking their aggregate score to 13-34 on successive Sundays by blowing Tyrone away in the Athletic Grounds was a much more significant statement of intent from Armagh.

Both teams had hammered Sligo away and lost to Tipp in their own backyard, but Tyrone came into the derby battle leading Armagh in the table thanks to a home win over Waterford compared to that Orchard draw with Sligo at Templeport.

Home advantage and greater need than their visitors may have made Armagh marginal favourites but most pundits predicted an intriguing tussle between two useful sides with a realistic chance of fighting for the Division Two title and sole promotion place on offer.

That didn’t transpire though as exceptionally positive Armagh really turned on the style and produced some magnificent football in perfect conditions, which was rewarded with five different players raising green flags in the opening 22 minutes.

Being 17 up at the interval was surely a scenario beyond the Orchard crew’s wildest dreams but what pleased McAtamney most was how Armagh maintained their intensity, discipline and ambition by neither shutting up shop, playing greedily as individuals nor letting up in defence.

“I was impressed with how the girls stuck to the gameplan regardless of what the scoreline was. We kept playing positively and doing the right things rather than losing focus which can subconsiously happen when you work up a lead like that,” reflects Fionnuala.

“We’ve talked about a certain way we want to play and been working hard to develop that so it is satisfying to see aspects coming together in an important match at our county headquarters against our traditional rivals.

“Of course there are no trophies handed out in February and we’ll work hard to keep progressing rather than getting carried away with this, even though it was an impressive performance and a convincing victory. It’s always work in progress.

“But it was certainly an enjoyable game from an Armagh perspective, not just the overall result but the fact we added nine scores in the second half when we were well ahead and also that we kept a clean sheet, because being a wee bit tighter at the back was one of our objectives going into this game.”

Although McAtamney and McCaffrey are familiar figures in Armagh ladies football who inherited a fairly settled squad with a hugely experienced core, new management coming in is still a significant change for any team.

By contrast opening opponents Tipperary were simply picking up where they left off last September in Croke Park where they rounded off an unbeaten 2017 by winning the All Ireland Intermediate decider.

Armagh made a fast start but Tipperary’s goal just before the interval threw them a lifeline and a team well used to winning played with increasing confidence and momentum in the second half on their way to victory.

“We played some good football in the first half against Tipperary but they were difficult first opponents as a well established side coming off the back of fantastic success last season and they undoubtedly benefited from such continuity.

“But there was valuable learning in that opening game, especially for myself and Lorraine, and it was an improved performance against Cavan. We’d wobbled against Tipperary but showed real resilience to fight back for the draw from eight points down.

“It was important to take something from that match, psychologically and in terms of the table, and that let us just go out and play in the Sligo game. We won well that day but this was a significantly improved performance because Tyrone are considerably stronger opponents.

“Both teams had similar results before facing each other so we were expecting a tighter game and had prepared the girls for that. It was a pleasant surprise to get off to a start like that but it was good to see the girls keep pushing hard rather than just settle for staying ahead.

“Naturally we’re delighted to beat Tyrone by 24 points, but it’s still early in the season and they’ll expect to improve plenty between now and the business end of the league so it’s important that we work hard and keep raising our own game.

“I know what talent there is in this group but it was gratifying to see them showcase that in the Athletic Grounds with some super play and fantastic scores. We worked well as a team and the girls are really buying into the way we’ve talked about playing.

“They’re doing everything we’re asking of them and I’m pleased we were able to give girls a good run off the bench against Tyrone for they’re all putting in the work and not everyone can get the same playing time.

“We’ve chosen to work with a tight panel of 24 at present so that gives girls a realistic sense of opportunity but there’s still significant competition for places across the team and having some very versatile players means we have plenty of options.

“Promotion back to Division One is a big goal this season so results are vital but these league games are also very valuable learning exercises for us in terms of specific players and which combinations work well,” insists McAtamney.