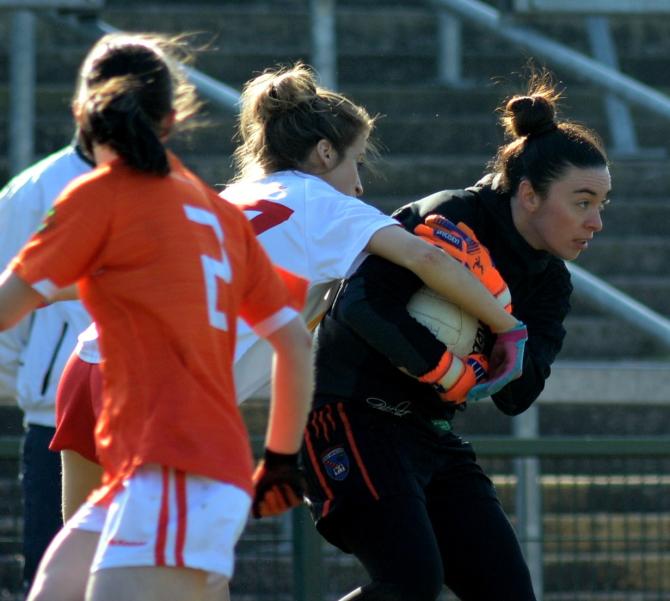 BY her own admission she was a reluctant convert, but Caroline O’Hare has come to accept that there are worse things than having the Armagh goalkeeping gloves thrust upon you.

That’s just as well because being the Orchard No 1 is a job the Mullaghbawn woman may find herself doing for the foreseeable future after her superlative personal performance against Tyrone in Armagh’s most recent National League game.

As well as pulling off a series of fantastic saves against Tyrone, O’Hare was assured under the high ball, did well with her kickouts and even occasionally showcased her footballing skills at the back on a memorable afternoon as Armagh hammered their traditional rivals 6-14 to 0-8.

There was plenty of acclaim for the Orchard outfit’s forwards who posted such an imposing score but the Armagh goalkeeper rightly got her share of the plaudits for a top drawer display which closed the door on every effort Tyrone made to get back in the game.

“The fact Tyrone were well behind from fairly on meant they had to chase goals but thankfully I managed to pull off a few saves and deal with the balls they were speculatively pumping in, which in turn increases confidence,” reflects Caroline.

“You don’t want to be bombarded all the time but, providing you can cope with what comes at you, it’s good to be in the game as a goalkeeper rather than going for too long without anything to do as your concentration can wander.

“Beating Tyrone by 24 points in the Athletic Grounds obviously feels good in itself and, apart from the result, we can take encouragement from what was a very pleasing performance across the entire team.

“Scoring five first half goals set us up for victory but we kept pushing hard right to the end and it was satisfying that we kept a clean sheet, not just from a goalkeeping pride perspective, but because we’d talked about that as a team.

“They say goals win games and last season we let in a damaging number compared to what we scored. This was our first shut-out this year which is something we can take satisfaction from and try to build upon. It’s a collective effort from those at the back and I’m fortunate to have some very experienced defenders in front of me.”

O’Hare had such confidence that she even chose to field a couple of dropping balls, rugby fullback style, which would have harmlessly bounced over the end line but she insists that wasn’t just exhibitionism.

“Unless you’re trying to run the clock down it can be better to keep the ball in play rather than giving the opposition time to set themselves for a kickout. Although we were well ahead against Tyrone we wanted to maintain tempo rather than just shut up shop.

“As someone who hasn’t been a lifelong goalkeeper, each save I make or high ball I claim in a match helps the basics of the job become second nature,” observes O’Hare who has also tried to draw on her alternative experiences in trying to second guess opposing forwards.

“I suppose thinking like a forward can be beneficial for nets in terms of reading them coming in but the danger can be assuming that they’d do what I would and going too early.

“The diving and shot-stopping are the elements I’ve had to learn whereas the handling and kickouts come naturally for me. Knowing I’ve a bit of speed gives me confidence coming off my line and I’m comfortable playing the ball out when needed. Though management might not want me to do that too much!” she laughs.

There hasn’t been a better performance from an Armagh goalkeeper in recent years than O’Hare’s against Tyrone even though the move into nets effectively came about by chance at the start of last season.

“We’d a challenge match against Cavan and the two specialist keepers weren’t available. So they asked around and it fell to me as I’d actually been nominated as the emergency cover for Katie Daly in the squad which won the All Ireland Intermediate title in 2012,” O’Hare reveals.

She got the last few minutes of that final in Croke Park up front and scored 1-6 coming off the bench in the following spring’s National League game against Wicklow but didn’t break into the starting team.

After that season she stepped away to help re-form Mullaghbawn Ladies after a spell at Dromintee and led her home club to Armagh Junior Championship success in their second year back in action.

Still only in her mid-20s, O’Hare had ambitions to make an Orchard comeback but couldn’t have envisaged just how her return to the Armagh ranks last season would work out.

Instead of fighting for meagre match minutes with other fringe forwards, she was Armagh’s starting goalkeeper throughout a roller-coaster NFL Division One campaign which had historic highs but ended in harsh relegation.

Armagh beat the then All Ireland champions Cork for the first time ever and also recorded a first away win over a Dublin team who would go on to claim the sport’s top prize six months later.

But they lost their other five league games, mostly by small margins and often after establishing interval leads, before going down narrowly to neighbours Monaghan in a play-off at the Athletic Grounds.

“Those were definitely deserved victories against both Cork and Dublin but we also let several results slip. Galway was the worst as we were seven up with nine minutes left. But we certainly proved we can compete in Division One and that’s why we’re so keen to get back there.

“Our defence was unreal against Cork and our fitness proved vital against Dublin in what was a very fast-paced game at Abbotstown. Their manager Mick Bohan actually asked afterwards what we were doing on the fitness front as he was really impressed.”

In a world where goalkeepers get singled out, O’Hare was arguably at fault for the two Monaghan goals in the regular league game in Clones but her supportive team-mates forcibly cited chances not taken at the other end rather than pointing fingers.

The following week when the teams met again in a play-off in the Athletic Grounds, 14-woman Armagh got overhauled in the second half but one of their strengths on the day was how O’Hare repeatedly dropped kickouts onto star player Caroline O’Hanlon with impressive precision.

“You can’t kick them all to Caroline obviously but it’s a good option because she’s so strong in the air and a great player to get on the ball. It was a disappointing defeat which cost us our first division status but there were positives to take from the league campaign.”

Armagh had an 11-point interval lead overturned by in-form Donegal in the Ulster Senior Championship semi-final and that heartbreaking Greencastle clash proved the end of O’Hare’s inter-county season as she tore ankle ligaments in training ahead of the All Ireland qualifiers.

“It was a bad grade of tear and I couldn’t do much until November. My fellow Armagh goalkeeper Anna Carr had done worse but I have to be on my feet a lot with work so the swelling and bruising just wasn’t going down,” says Caroline, a sports store
manager in Newry.

Although she still has significant ankle pain, O’Hare reported for Armagh pre-season training under new managers Lorraine McCaffrey and Fionnuala McAtamney and told them she wanted to be considered as a forward again.

Carrickcruppen’s Carr had the gloves for the first two NFL fixtures but was unavailable for the Sligo game and with Ellen McVerry – Caroline’s club keeper at Mullaghbawn – being based in England, she found herself back in nets.

“At that stage being a forward was still my preference but representing your county is an honour so you’ll play anywhere, especially if the alternative is sitting on the bench, and if management felt I could do a good job for them there I was happy to oblige.

“I’ve settled back into it quite quickly and, after the Tyrone game, I’m happy to commit to the goalkeeper position for Armagh though I’ll still play up front or in midfield for my club when the domestic season starts.

“But that’s not unheard of – (Dublin legend) Stephen Cluxton plays outfield for his club,” says O’Hare, a former Armagh City women’s soccer player who now lines out for Lurgan in that code.

Armagh have two other keepers in their present panel of 24 in Carr and McVerry but O’Hare now appears in pole position whereas it would be hard to see her getting a starting spot in the Orchard forward division when all the big guns are fit.

Joint manager McAtamney is a former Armagh goalkeeper herself, who was an important member of the team which reached the 2006 All Ireland final and made that season’s All Stars shortlist, so her endorsement of O’Hare’s display against Tyrone carries real weight.

“Caroline was brilliant, absolutely fantastic, and she made some top-class saves. She gained confidence from her first couple and likewise dealing well with a few high balls. Her kicking was good too so I’d definitely be happy enough with her all-round game,” says McAtamney.

Working with McAtamney should help O’Hare keep progressing and the player is full of admiration for the new Armagh management and how they’re going about their business.

“Fionnuala and Lorraine are great. They’ve got a good buzz going and every session is interesting and different. They’re so professional, so far ahead of the game. They’d gone back and watched all our matches from last season before starting to work with us,” enthuses O’Hare.