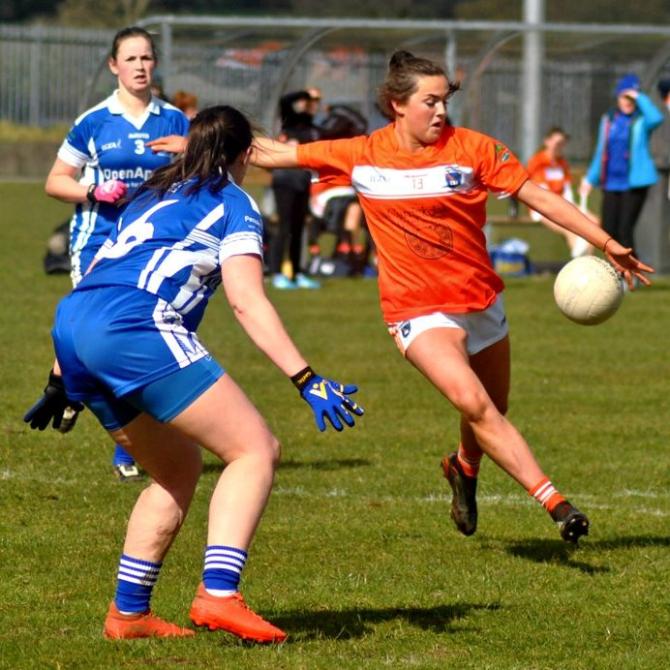 LETHAL: Armagh attacker Aimee Mackin kicks a point against Laois on her way to top-scoring for a fifth match out of five this season. Picture by young Armagh supporter Siofra Doyle.

IMEE Mackin’s hat-trick secured Armagh a third win on the spin which keeps them on course for a top four play-off place in Division Two as they strive to return to top flight National League football at the first attempt.

In spite of taking the field without taliswoman Caroline O’Hanlon for the first time in three years, the Orchard outfit eclipsed their Silverbridge visitors Laois by a nine-point margin on Sunday with markswoman Mackin kicking 3-7.

The 20-year-old Shane O’Neills scoring machine just returned on Thursday from the All Stars tour to Thailand where she netted twice as her class of 2017 lost to their 2016 counterparts 7-19 to 7-18 in an entertaining exhibition match in Bangkok.

O’Hanlon had left for Australia on Friday to captain the Northern Ireland netball team at the forthcoming Gold Coast Commonwealth Games but understrength Armagh got the job done without her against a competitive Laois side.

As well as O’Hanlon, Armagh were without her fellow All Star Mairead Tennyson, who was unavailable, while first choice Harps forward Kelly Mallon also took no part in the match, perhaps as a precautionary measure in light of her injury issues last season.

However with Mackin converting enough of the Orchard chances created and captain Caoimhe Morgan showing her experience, pace and physicality at the back, Armagh came away with the win which was widely expected.

Laois, who went ahead twice in the opening period, were buoyed by netting twice inside the first 19 minutes against an Armagh team whose campaign momentum had been broken by being left for almost a month since their last competitive match.

Armagh had run up an aggregate of 13-34 in achieving comprehensive victories over Sligo and Tyrone on their last two outings but this was their first fixture for four weeks thanks to a combination of the snow at the start of the month and the league’s scheduled break.

Especially with home advantage, Lorraine McCaffrey and Fionnuala McAtamney’s side were regarded as firm favourites for the win points against one of the less fancied teams in the second division.

Even aside from the Orchard crew’s prolific form of late, Laois may have made the journey north with some trepidation given that the painful memories of their two most recent clashes with Armagh remain fairly fresh.

In spite of having played two league levels above Armagh that spring, they were hammered 9-17 to 0-9 in the 2014 All Ireland quarter-final in Tullamore and then thumped 3-22 to 3-7 in the following season’s qualifier in Clones.

At least this time Laois didn’t have to face O’Hanlon, who had run the show in imperious fashion in that Tullamore match the week after returning from playing netball for Northern Ireland at the last Commonwealth Games in Glasgow, while Tennyson really shone at the back that day.

O’Hanon scored 2-6 from midfield that afternoon on her way to the All Ireland Player of the Year award, but Armagh have since become less reliant on the triple All Star’s scoreboard contribution, not least as a result of Mackin’s emergence.

All but one free and the penalty which clinched her hat-trick of Sunday’s 3-7 tally were posted from play while the other five Armagh points were spread among a quartet of players including Aimee’s younger sibling Blaithin.

Fionnuala McKenna, who stepped up to take responsibility as a driving force for Armagh up the middle in O’Hanlon’s absence with good support from Blaithin Mackin, kicked a free and a score from play while there was also a point apiece from Aoife McCoy and Tiarna Grimes.

With Tennyson missing, Megan Sheridan of Forkhill got a first start of the year at wing back where she was a regular last season, with Mallon’s place in the reshuffled line-up going to the versatile Shauna Grey from Dromintee.

Laois scored the afternoon’s opening point inside the first minute and although Aimee Mackin quickly levelled effortlessly from an acute angle on the right, the visitors created two early openings which brought a low save from Caroline O’Hare and a poor wide respectively.

Aimee Mackin linked with Crossmaglen’s Lauren McConville to put Armagh ahead after four minutes and then Marian McGuinness began the move which led to Dromintee’s McCoy kicking her only point of the afternoon.

McCoy couldn’t hold a big ball in after a great claim by Blaithin Mackin but the pressure continued before the excellent Laois goalkeeper saved well from Aimee Mackin.

Laois raised a green flag themselves almost immediately as Erone Fitzpatrick dipped a ball just under a leaping O’Hare’s crossbar with a Grimes shot being deflected for a 45 and Blaithin Mackin kicking a big wide before Armagh responded in kind.
Aimee Mackin got her first goal in the 12th minute and soon added a point after a timely intervention at the back by her captain Morgan to win the ball and a free.

McConville, who was well shackled by her marker, had a shot blocked behind following a great run from McKenna and O’Hare had to produce another sharp save at the other end before two more Armagh wides allowed Laois to draw level.

Grey sent clubmate McCoy on a threatening run but she pushed her shot just past the near post and then Aimee Mackin was narrowly wide with a speculative shot from well out.

Morgan broke up another Laois attack but, after Grimes failed to claim her ball out of defence, the skipper’s sister Sarah Marley, who was otherwise tirelessly effective in defence, slipped on the deceptively soft surface and the visitors got in for their second goal.

However Armagh responded promptly with quickfire points by Blaithin Mackin and a long-range effort from McKenna and, although Laois pulled one back, their keeper gift-wrapped Aimee Mackin her second goal of the afternoon in the 23rd minute.

She added a point almost immediately and, after O’Hare had pulled off an eye-catchingly athletic save, the elder Mackin converted a free won by McConville which was cancelled out by Laois with the last kick of the half.

So the teams turned around with Armagh ahead on an interval scoreline of 2-8 to 2-3 and, far from giving up the ghost, Laois scored first from a free only for Aimee Mackin to restore the gap to five a minute later.

O’Hare had to pluck a ball from under her crossbar and Morgan cut out another attack and, although McKenna kicked a right-footed free, the visitors replied with a well-worked point.

A nice Armagh move undoubtedly deserved a goal but the Laois goalkeeper produced an absolutely brilliant save at the feet of McCoy and she did something similarly stunning seven minutes later to deny Aimee Mackin after a perfect ball in by her sister Blaithin.

In between, Laois and Aimee Mackin, off her right foot following typical persistence from McConville, had traded points but Armagh also came close to a third goal.

Aimee Mackin dropped in a free which the diminutive McConville, who increasingly came into the game in the second half, caught superbly and hung up in the goalmouth only for the challenging McCoy to give away a free.

Laois kicked two wides early in the final quarter, sandwiching one by Aimee Mackin, and the Armagh management made an attacking change by sending on Silverbridge schoolgirl Niamh Reel in place of Grey.

Within three minutes of her arrival, young Reel was brought down in the goalmouth and Aimee Mackin converted the penalty to the net to finally give the Orchard a comfortable cushion of eight points with eight minutes remaining.

The ever-industrious Sharon Reel’s relentless efforts frustrated Laois attempts to grab a lifeline and Armagh’s main concern thereafter was the well-being of captain Morgan, who was thrown to the ground in a gratuitous tackle just after receiving treatment for an injury.

She was fit to finish the game however and Armagh had the last word with a point from midfielder Grimes after the ferociously combative McConville had smashed through a Laois opponent to set up a final Orchard attack.

Armagh’s margin of victory was a comfortable nine points on an afternoon when they had only 17 outfield players to call upon and used just two subs, the second change coming near the end when teenage forward Aoibheann Jones replaced Shane O’Neills clubmate Blaithin Mackin.

Although Armagh have a strong starting team, they were down to the bare bones at the weekend in terms of squad depth, with an already well-pruned panel further hit by cruciate surgery for Catherine Marley and a potentially serious knee injury sustained by Louise Kenny.

Kenny, who would have hoped to be pressing Carrickcruppen’s Rebecca O’Reilly for a starting spot in the Orchard defence against Laois, sustained damage in St Mary’s University College’s Moynihan Cup semi-final victory last month.

O’Hanlon will miss the two remaining regular league games but Tennyson and Mallon should hopefully be back this Sunday when the Orchard outfit face a tougher test, even with home advantage, against Waterford.

Waterford, who beat both Cork and Kerry in last season’s Munster Senior Championship and knocked the women in orange out of the previous year’s All Ireland, consolidated second place in the table by beating former Armagh manager James Daly’s Cavan 4-9 to1-6 at the weekend.

That result leaves the orangewomen clear in third place but highlights the significant challenge which Waterford will pose against McAtamney and McCaffrey’s team.

Table toppers Tipperary, who won at Silverbridge in the opening game, maintained their 100 percent record by crushing basement side Sligo 4-19 to 0-7 and Tyrone replace Cavan in the top four thanks to Saturday’s 6-9 to 2-9 home win over Clare.

It is now mathematically certain that the four places in the semi-final line-up will be between five teams, a scenario which appeared probable even before the season started, but at this stage only Tipperary are guaranteed their ticket to the knockout stages.