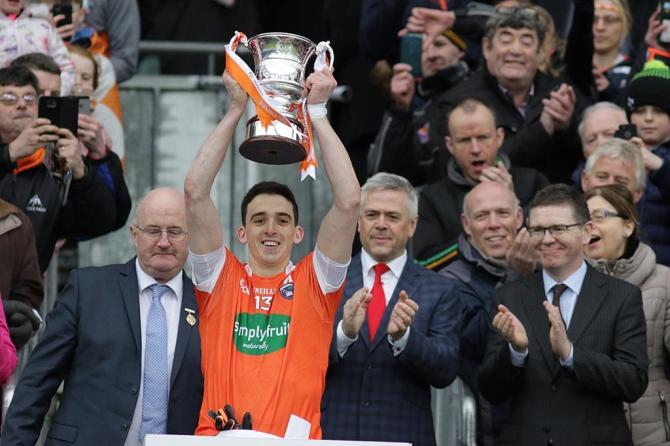 IN winning the Division 3 final against Fermanagh at Croke Park, Armagh are promoted back to Division 2 as Division 3 League Champions 2018.

The game overall was low key and way short of championship ‘pace and pitch’. It was a close game, a 17 scores each affair, with the lead changing several times first half, although Armagh held it the longer.

Come the second half, Armagh once in front through influential sub, Ryan McShane, the Orchard were never behind with the opportunist goal by ‘man of the match’ Andrew Murnin proving to be the difference between the two teams.

While the game looked close, Fermanagh held the greater possession but Armagh were certainly the better side in being more inventive, more attacking in nature and yet still able to prevent the Ernemen having a ‘sniff’ of a goal chance with the result that keeper Blaine Hughes had very little to do.

While Armagh were more direct and attack minded, going forward at every instance of possession, Fermanagh were ultra-defence minded, played the poorer quality football with little or no intensity to their game.

There was little penetration to their game and they seemed totally reliant on free-taking to garner scores, endorsed by Seamus Quigley’s unerringly accurate nine converted frees, although he had a ‘hiccup’ in the second half when he hit three in a row frees wide.

Fermanagh were cute in drawing a degree of indiscipline out of Armagh players, clearly obvious in Sean Quigley’s very early in the game ‘black card’ dismissal for an infringement with Gregory McCabe. That Armagh descended into indiscipline allowed Fermanagh, to coin a phrase, ‘buy cheap frees’ as a means of securing scores.

The only period of ‘nail-biting’ excitement for both teams was in the last seven minutes of the game, including the four minutes of added on time.

Going into that period, Armagh were five points in front but could not score again. It was then Fermanagh threw caution to the wind and attacked incessantly. Armagh defended resolutely although no clear cut goal chances but the Ernemen went down ‘fighting’ to post three points, all from play, from Tomas Corrigan, Conal Jones and Barry Mulrone. In the very last minute, moments of ‘ping-pong’ ball against the Armagh rearguard were successfully thwarted and the Orchard finished the game in possession. Their win repeated the same scenario from three years ago when Armagh had turned over Fermanagh, who had topped the League table, to become 2015 Division 3 champions.

Unfortunately, Armagh came back down to Division 3 one year later whereas Fermanagh stayed for two years in Division 2 before coming down last season with Derry, a county who so, so surprisingly will languish in Division 4 with Antrim next season.

There then came a period of ‘double score’ play in which the lead changed three times. Seamus Quigley (free) and Conal Jones gave Fermanagh a first time lead (5-4) but Niall Grimley (in a three passes to score move) and Ben Crealey (using a clever ‘step’ inside dummy solo) landed the points which gave Armagh back the lead (6-5).

By this time, Armagh had seen six different scorers (five from play) while Fermanagh had three different scorers (four from frees). A brace of Seamus Quigley close-in frees saw Fermanagh go ahead again (7-6). Paddy Burns brilliantly broke clear on the overlap to land a spectacular equaliser ‘A la’ Andy Mallon of old. Six minutes of tetchy, attritional and scoreless play followed before another Seamus Quigley pointed free, in injury time, gave the Ernemen a lead (8-7) for the last time in the game. Just on the half-time whistle, Andrew Murnin on the second attempt turned to equalise and send Armagh in level at the interval on a scoreline of 8-8.

The game restarted in controversy, as influential sub Ryan McShane’s shot seemingly cleared over the bar but it was ruled out. After a Seamus Quigley missed free, a creative move involving Rory Grugan, Ben Crealey and Niall Grimley had Ryan McShane point for Armagh to lead 9-8. Shortly afterwards, Andrew Murnin blasted over,  when a goal looked on and Armagh had a tenth point (nine from play to date).

Ryan Jones, after an excellent mazy solo and Niall Grimley (free) quickly exchanged scores. Armagh began to look the likely winners as Ben Crealey and Niall Grimley approach play allowed Paddy Burns to land another brilliant point on the overlap. Armagh were now three up and, as Gavin McParland replaced Ethan Rafferty, the question was asked ‘Can Armagh close this game out?’

It looked possible as Seamus Quigley’s close in free was negated by Paddy Burns’ excellent weighted pass to Aidan Forker for an excellent score from a tight angle. Fermanagh doggedly stayed on Armagh’s tail, however as Seamus Quigley landed another free. The decisive turning point came in the 19th minute of the second half. Ben Crealey’s high ball to the square saw Gregory McCabe jump high with Fermanagh keeper, Paddy Cadden. It was Greg who got the knock down touch and there was Andrew Murnin, opportunely on hand, to rush in and fist to the net.

A five point lead was now going to be hard to overhaul but Fermanagh tried valiantly to do so by now playing open and expansive play. They would score six more times before the end, the last five being from play. A dubious foul was sent over by Seamus Quigley but he soon had hit three frees wide from the opposite side.

In the next six minutes, the game had no likely winner as a brace of Ryan Jones’ points either side of a well worked Niall Rowland point saw the Orchard lead reduced to a single strike, that goal, at 1-14 to 0-14.

Armagh, to their credit, stayed resilient and solid in their purpose endorsed by two excellent points which once again stretched their lead out to five points. Firstly, Aidan Forker and Niall Grimley opened up the way for Ryan ‘Minnie’ McShane to fire over a brilliant point from a difficult angle. Following that one minute later, Niall Grimley fabulously curled over a ‘45’.

There were those seven minutes left. Armagh, in that time, were virtually under siege but their resolve held firm. By the end of normal time, Fermanagh had reduced the deficit to a goal via a ‘break-ball’ solo point by Tomas Corrigan followed by a Conal Jones long ranger.

Armagh were under pressure but were totally in control of that pressure. In the four minutes of injury time, Fermanagh were never afforded a clear cut chance from shooting, sorry, scoring range. Once, however, from a turn-over, a quick penetrative attack, Barry Mulrone reduced the gap to a catchable and very possibly rewarding two points. As the Ernemen ‘rushed’ their play, Armagh pulled down the shutters to close their goals out. The final whistle went with Armagh in possession and building. The trophy may be a visible testimony to the successful return to Division 2, but in the minds of the players, management and supporters the memories of six wins, one draw, one defeat in an EIGHT game league campaign will be a bigger and more valuable prize.